XY034 The Bonds of Mega Evolution:

1733 The Bonds of Mega Evolution

I tried to be nice to Korrina, I really did. When she first appeared on our television screens, I likened her appearance to an outcast from Rocket Power, and reveled in the long-overdo reference to Pikachu’s ketchup addiction. I genuinely enjoyed the introduction of her grandfather and his secret gay lover, but she began to wear out her welcome with me when her little side arc story wouldn’t end and she forced Ash, Serena, Clemont, Bonnie (and we the viewing audience – not to mention Team Rocket) to accompany her on yet another journey. Now Korrina is monopolizing the plot of the fifth episode in a row, and I am quickly losing patience. At this point I don’t care if she ever gets her Mega Lucario under control, I just want her to give Ash a gym badge and go away. Hell, even the writers appear to be bored, seeing as they have lamely recycled a title they used just six episodes ago.

Ash and the gang (or more correctly, Korrina and the gang) have finally arrived at Pomace Mountain at the behest of Gurkinn. Here they meet Mabel, an old hag (and possibly a “f*g hag” due to her friendship with Gurkinn and McGinty) who is also a respected master of mega evolution. 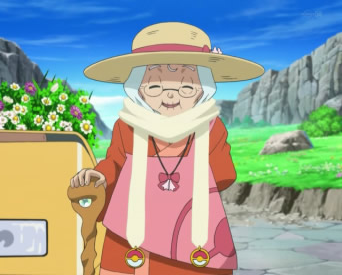 (Hmm, maybe Professor Sycamore should just interview her instead of traveling around trying to unravel the secrets of master evolution by himself) Everyone is introduced to Mabel’s Mawile, and Ash’s Nintendo puppet masters make him say the phrase “who’s that Pokemon?” (everybody drink!) as he uses Dexter to check out yet another Pokemon that he has already seen before.

Mabel wastes no time in challenging Korrina to a battle in order to see what the young gym leader can do, and the two women use their mighty morphin’ mega stones to call upon the power of their mega evolved Pokemon. 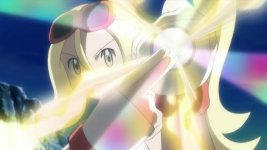 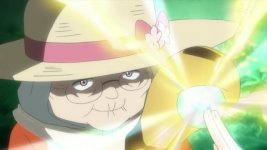 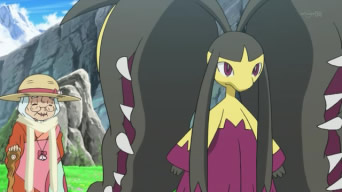 For those of you who have been following the Korrina storyline so far, the result of the battle should not be surprising. Mega Lucario starts out the battle strong, going toe to toe with Mega Mawile, but soon enough it is overcome by its own aura and descends into a rabid berserk state. In a wild frenzy, Mega Lucario is unable to focus its attacks and Mega Mawile finally subdues it with a Fairy Wind.

Meanwhile, on a nearby cliff, Team Rocket have gathered to watch the twerpish events taking place below. Our voluptuous villains take a moment to consider how powerful they would become with a newly evil Mega Lucario, Mega Mawile, and Pikachu at their command, 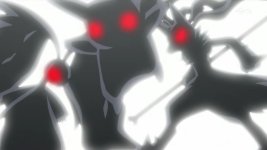 but quickly determine that they will sit back and allow the events of todays episode to unfold on their on. (Clearly even Team Rocket doesn’t want to touch today’s stinker with a ten-foot pole)

Back inside Mabel’s house, the mega evolution master has issued Korrina and friends with their first task – flower arranging. Korrina kind of wants to get to the Pokemon training, but whatever – at least Bonnie seems excited, as does Ash. Flower arranging “sounds like fun,” declares the show’s mentally deficient hero.

(What happened to you Ash? Did you succumb to your inner Ashley? I know you traditionally get all excited about any Pokemon-related activity – but this one is really a stretch) Clemont has his own designs on “winning” the flower arranging, however, and he introduces his brand new Clemontic invention – “witness the future of flower arranging!” 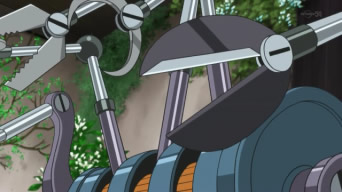 (Also, is it just me, or did the music during Clemont’s invention scene sound very One Piece-y?) Unfortunately for the Lumiose City Gym Leader and amateur John Denver impersonator, his flower arranging machine goes the way of all Clemont inventions and explodes to comedic effect – temporarily transforming everyone into frizzy-haired Boondocks rejects.

Mabel comments approvingly to Ash and Pikachu about their arrangement, but she is not particularly impressed with Korrina and Lucario’s two-arrangements-in-one-pot effort. In fact, Mabel declares that the group needs to keep gathering and arranging flowers until such a time as she is satisfied with everyone’s (but presumably just Korrina and Lucario’s) work. Korrina is upset that Mabel won’t just cut to the Pokemon training already, but she doesn’t seem to have realized that we have entered into some kind of Mr. Miyagi/Yoda/Master Roshi situation – the flower arranging is the training!

For several days, Korrina and friends return to Mabel with new flower arrangements, and for several days the wizened evolution expert rejects Korrina and Lucario’s arrangements as inadequate. Finally, Korrina spots some jingling bell flowers growing out of a craggy cliff face. She sends Lucario up to fetch them and directs its movements so the Aura Pokemon doesn’t fall to its death. Having accomplished this, Korrina fashions a bracelet out of some of the flowers and puts the rest in a vase. 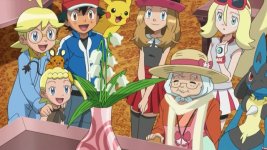 This half-assed “arrangement” strangely wins Mabel’s approval, at long last – and not a moment too soon! In the shared bedroom that night (I only see one extra-wide bunk bed with Clemont on the top and Ash on the bottom, I wonder what the sleeping arrangements are?) even girly-girl Serena expresses frustration with the never-ending flower arranging. 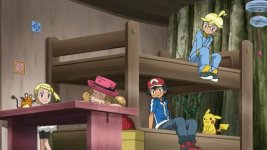 Outside, Korrina and Lucario stare up at the full moon pensively (copping Meowth’s usual schtick) until Mabel arrives and informs the frustrated gym leader what we already realized – the flower arranging was the mega evolution training.

But then suddenly – Team Rocket! 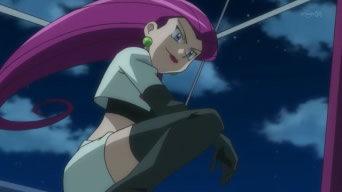 Yes, the terrible trio have finally made their move after days of watching the twerps collect and arrange flowers – an activity that even James thinks is gay. (And by “gay” I mean the middle school definition, which is synonymous with “lame” or “uncool”) Jessie makes a token effort to improve this terrible episode by striking a leggy pose, but even her smoldering sexuality is not enough today. Team Rocket’s plan is right out of their typical playbook – they have snagged Pikachu and Mawile inside an “indestructible” box, and are leisurely floating past the assembled twerps at the speed of wind trying to make their getaway. Korrina orders Lucario to mega evolve, but Team Rocket are feeling especially competent today, as Inkay and Pumpkaboo are actually putting up a good fight. Since the other kids clearly have no faith in any of their Pokemon besides Pikachu, they simply standby gape-mouthed as Mega Lucario descends into its mad berserker state. Korrina bravely stands in front of her enraged Pokemon and allows it to bite her until it regains its composure, which is actually something of a recurring theme in this show… 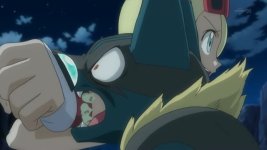 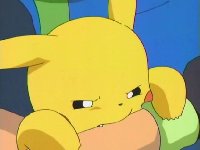 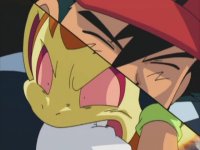 Finally free from “the bonds of mega evolution,” Mega Lucario whips out its long hardened bone and beats off Team Rocket’s attacks. Pikachu and Mawile are freed as well, and after another mega evolution, the three Pokemon use their combined powers to send Team Rocket blasting off again. Hooray! It’s finally over!

The next morning, Korrina thanks Mabel for all the help she gave her and Lucario (I’d ask for a refund, all that flower arranging and all you had to do was let the damn thing bite you?), and the gang prepares to depart for their next adventure. But just as we are facing the prospect of yet another episode starring Korrina, Ash intervenes to fix the spotlight firmly back on himself. He tells the Shalour City Gym Leader that this is where they must part ways. Ash’s disciples are confused by their master’s words (as disciples frequently are), they can’t understand why Korrina cannot keep traveling with them, especially seeing as she is the leader of the next gym Ash needs to challenge. Clemont is obviously upset because of his NeoGymShipping lust for Korrina, but weirdly enough, even jealous girlfriend Serena is in favor of allowing a potential rival for Ash’s (lack of) affections to continue traveling with them. Ash makes up a great cover story about how he needs to keep training before he is ready to challenge Korrina, and with that, we are finally rid of the boring sk8er girl.

Final thoughts: It’s finally over!!!!! On the one hand, I hate to be too critical of the writers for experimenting with character development and extended story lines, but I think we can all agree this one went on for way too long. The cure for Mega Lucario’s insane behavior was also a let down. While I kind of appreciated Mabel being an allusion to other old masters who use the “wax on wax off” training trope, an episode of Pokemon about flower arranging ended up being just as boring as it sounds. Even Team Rocket didn’t have their hearts in this one. Hopefully we are on to bigger and better things without Korrina.