Wherein Ash and friends witness a gay marriage proposal and Korrina departs with the twerps on a new adventure. 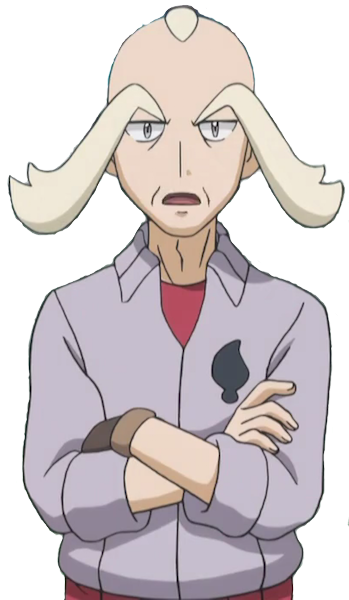 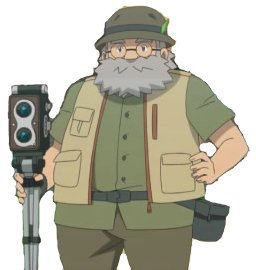 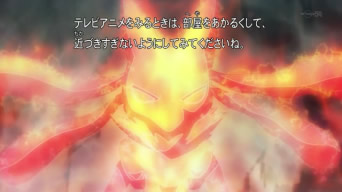 For the past several episodes, the ranks of Ash’s disciples have been swelled by the addition of Korrina: the Shalour City Gym Leader. Kalos’ very own sk8er girl was on a quest to find Lucarionite to mega evolve her Lucario, after first becoming worthy of mega evolution by winning 100 Pokemon battles in a row, and the previous episode ended with Korrina ordering Lucario to mega evolve.

The Evolution Fighter is overjoyed at finally having Mega Lucario at long last, but her grandfather and his lover seem nonplussed at best, 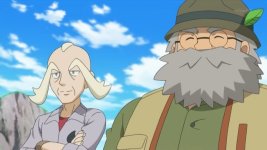 undoubtedly because Korrina and her new friends intruded on their secret gay weekend in the mountains. (#GeosengeShipping)

Meanwhile, behind a nearby rock, the show’s true stars make their (unfortunately) only appearance of the episode, ogling Korrina’s new Pokemon and making some social commentary on Nintendo’s sixth generation marketing gimmick. 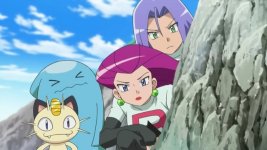 “Lucario mega evolved as well,” James notes to his teammates. “It’s the thing to do these days,” responds Jessie, ever one to stay on top of the latest trends. She then turns to Meowth and demands, “when will you mega evolve!” “Chill out!” responds the Scratch Cat, “I always save the best for last.” (Much as with Pikachu, conventional wisdom would seem to imply that Meowth would need to become a Persian before further evolution would be possible. And in the case of our Meowth, I just don’t see this happening. Plus, talking quadruped animals just seem weird…looking at you Lion King!)

Korrina cannot wait to break in her new Mega Lucario and Ash agrees to engage her in a gym battle preview. (Although if Ash couldn’t beat her regular Lucario two episodes ago, I’m not sure what makes him so confident things will be different this time. However, one of the perks of being dumb-Ash is that he has probably already forgotten the aforementioned event – leaving him in a state of ignorant bliss) Ash calls out Pikachu to open the match with an Iron Tail, but things soon get weird. Mega Lucario’s eyes shrink to glowing red beads, and the Aura Pokemon starts behaving erratically. It ignores Korrina’s orders and slams Pikachu into a nearby rock face – leaving a Pika-imprint in the stone. Unwilling to let Ash surrender, Mega Lucario bites Pikachu on the tail and flings it forward before trying to kick the Electric Mouse while it’s down. 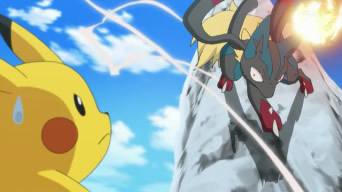 “No Lucario,” admonishes Korrina, “that’s no way to act in a battle.” (I didn’t realize there was a list of acceptable behaviors in a cockfight? After all, Bite and several kinds of kicks are all legitimate moves. Korrina is probably just irritated that her slave isn’t obeying its master) Ash dives in front of Pikachu, but by this point Mega Lucario is completely out of control and it prepares to annihilate everything in its path. 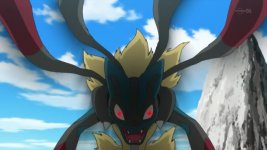 (It seems like Korrina could use a few more gym badges before Lucario will listen to her – rookie mistake) Gurkinn, obviously hoping to limit the knowledge of his affair with McGinty, decides to intervene before his granddaughter’s Pokemon murders Ash and attracts the attention of the nosey Geosenge press corps. The eyebrowed wonder calls out his Lucario, and it uses its aura powers to nullify Mega Lucario, as well as causing Team Rocket to blast off again much too soon. 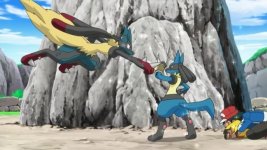 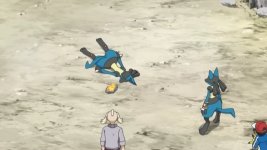 Mega Lucario falls to its knees, devolves, and surrenders the giant hunk of Lucarionite from the previous episode that it had apparently subsumed. 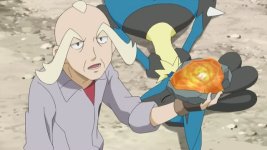 Gurkinn bends down to grab the Lucarionite and offers it to his lover, saying, “McGinty, please take this.” (What do we have here? A man down on his knees and giving a precious stone to his paramour – have we just witnessed a GeosengeShipping proposal? It would appear that gay marriage is legal in forward-thinking Kalos)

After a round of mazel tov-s for the happy couple, everyone repairs to the local Pokemon Center to seek treatment for Pikachu and Lucario, which is also where we meet the featured Who’s That Pokemon of the day – Wigglytuff. 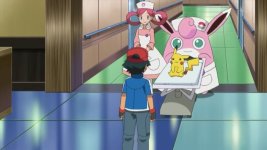 (Chansey is not good enough for the Kalos Nurse Joys for some reason, perhaps they aren’t as sufficiently French as the quick-to-anger members of the ‘puff family) Korrina is upset about the behavior of her Mega Lucario, and her friends try and reassure her that the Pokemon just needs to get used to its new powers.

Ash could offer some valuable personal experience to the Shalour City Gym Leader, after all he once owned an ornery Charmeleon that refused to obey him after it evolved from a loyal Charmander.

This was supposed to help explain the game mechanic where traded Pokemon can become unruly at certain levels if their trainers don’t own enough gym badges. However, Ash’s Charmeleon and later Charizard continued to disobey its trainer even after Ash obtained the Earth Badge. I like to think this was because Charizard realized the more-luck/pity-than-skill way in which Ash “won” most of his Kanto badges, and frankly did not respect him. Eventually, Ash was able to bond with Charizard after he stayed up the whole night thawing out the giant fire lizard after it was frozen by a super-powered Poliwrath. But Ash tells Korrina none of these things, and she is left to continue to worry about Lucario on her own.

Gurkinn arrives at the Pokemon Center and continues to berate his granddaughter for the way that her Lucario behaved earlier. Before things can get too heated, however, McGinty shows up with a Lucarionite bracelet as a gift for his new step-granddaughter. 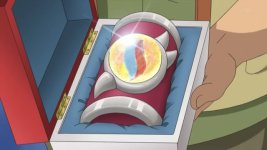 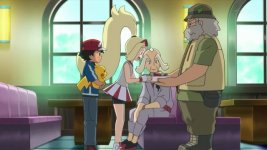 Korrina asks McGinty if he made Gurkinn his mega evolution bracelet as well, and when the old photographer and amateur jeweler responds in the affirmative he gives us a glimpse of just how long this affair has been going on.

Ash and the gang sit down with Korrina and her granddads and the group discusses why Korrina’s Mega Lucario is so out of control when Diantha’s Mega Gardevoir seemed to be the picture of composure. (If only the Kalos region had some kind of academic figure who was an expert on mega evolution…) However, soon enough Nurse Joy returns with Lucario and Korrina happily presents it with its new evolution bracelet. “So chic!” gushes Serena just like a woman – she’s only interested in mega evolution for the accessories.

Gurkinn is insistent that Korrina still does not understand what it takes to master mega evolution, and so he challenges her to a Lucario vs Lucario battle. Korrina puts on her helmet and roller skates (or are the heelys?) to let us know that she is taking the battle seriously. The two Lucario mega evolve right away (apparently mega evolution operates similarly to a Power Ranger morph…), and the battle goes well for a little bit, with both Pokemon landing blows, but soon enough Gurkinn’s Mega Lucario smacks its counterpart into the dirt, and Korrina’s Mega Lucario arrises with the crazy in its eyes yet again. 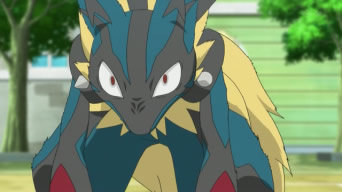 This is not good news for Korrina, who was hoping that her Lucario’s behavior problem would have magically solved itself in the time since her last battle with Ash. Korrina’s Mega Lucario continues to attack wildly and without orders from its trainer, but Gurkinn is determined to end this now, and calmly tells his Mega Lucario to stop his granddaughter’s Pokemon in its tracks. 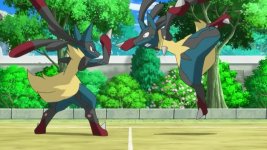 This accomplished, Korrina’s Mega Lucario is blasted so hard that it simultaneously faints and devolves.

Korrina is despondent – how could her Pokemon fail again after all that hard work she put it not doing anything between this battle and her previous battle with Ash? Gurkinn has an idea about what is wrong with his granddaughter, and he isn’t shy about letting his feeling be known: 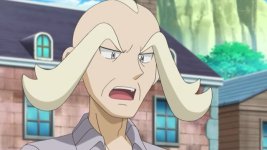 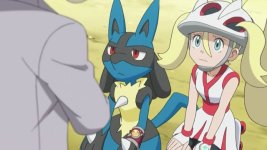 He tells Korrina (more like “yells at,” really) that she has spent too much time together with her Lucario, and consequently, she doesn’t understand it well enough…? (Yeah, I don’t get it either) 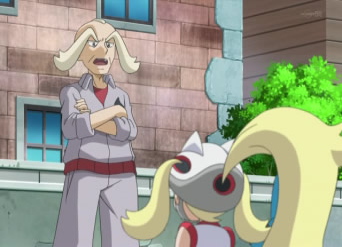 However, Korrina does not have time to dissect the illogical nature of her grandfather’s advice – she is at rapt attention on her knees at his feet (McGinty’s usual position). Gurkinn makes a very Professor Oak-like pronouncement. His granddaughter needs to go on a quest to a place called Pomace Mountain in order to learn the mysterious ways of mega evolution. More importantly (much as with Ash’s Pokedex quest), this task will get Korrina away from her amorous grandfather – leaving him free to make whoopee with McGinty without fear of interruption (just like Oak and Delia Ketchum). 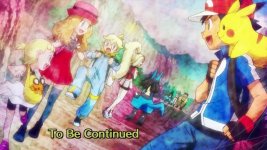 And thus another episode of Pokemon has come to an end. It seems that Korrina is becoming a semi-permanent member of Ash’s entourage – her role has been upgraded to frequent guest star. What future do the writers have in store for her character? Will she challenge Serena’s uncontested monopoly over unrequited Ash-love? Or perhaps she and Clemont will create some kind of NeoGymShipping? And what about the newly married Gurkinn and McGinty? Will they embrace prevailing gay stereotypes and open a bed and breakfast together in Geosenge Town? There’s only one way to find out Pokemon fans: tune in next time!