829 コルニとルカリオ！メガシンカの秘密!! Corni and Lucario! The Secret of Mega Evolution!!

Wherein cult leader Ash attracts yet another disciple to his coterie and Team Rocket auditions for Project Runway. 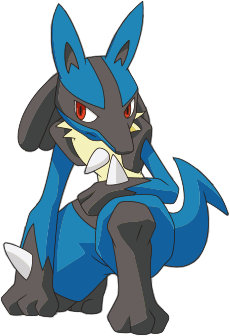 Thirty episodes in to his journey through Kalos, Ash Ketchum is still looking for his third gym badge as he and his friends travel towards Shalour City. Everyone comments on how nice the weather is, and suddenly Ash begins to take off in a sprint with Pikachu. 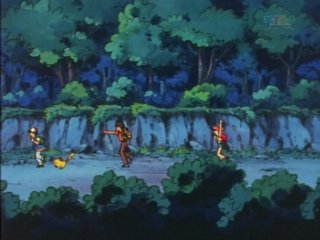 Serena, Ash’s current squeeze (although he doesn’t know it), is worried and cries out, “Ash, what are you doing?!” Her concern is most likely motivated both for Ash’s safety, since even basic motor skills can be a taxing task for his puny brain, and also the fear that Ash is trying to run away from her smothering affections – the same way he often tried to escape from his first girlfriend Misty. 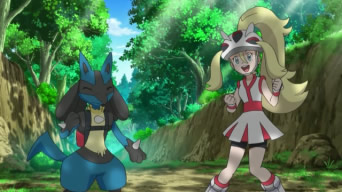 Ash doesn’t get very far before he runs into a reject from Nickelodeon’s Rocket Power – a girl named Korrina who embraces both the sk8er girl lifestyle and also the dedication to helmet safety required by children’s animation censors. Apparently Korrina finds time to train Pokemon in between playing x-treme sports and listening to Avril Lavigne, and she introduces her Lucario to Ash and his friends who introduce themselves right back. Ash whips out Dexter to get the details on Lucario – seemingly forgetting the number of Lucario he has met before now; including the one he sort of owned and who died for him in the one movie where May kept putting her body in compromising positions. 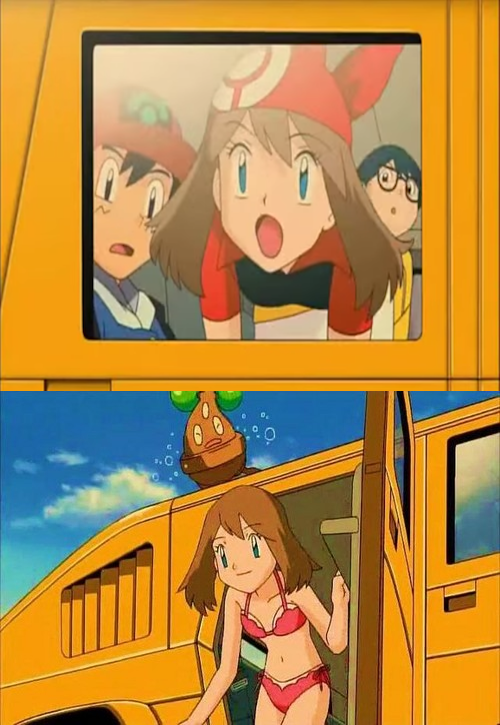 Although, in all fairness to Ash, he has probably also forgotten about May and Max by this point too (heck, maybe even Brock) – the boy has a rather limited attention span, after all.

Korrina does something next that is guaranteed to get Ash’s attention – challenging him to a Pokemon battle. Ash accepts without hesitation and in a nearby clearing he pits his stalwart Pikachu against Korrina’s Lucario. Pikachu bounces off the Aura Pokemon ineffectively (causing an irate Serena to urge her man on), and Lucario powers up with a Swords Dance. 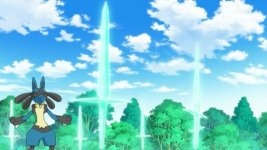 would run train with Hyper Beam or Earthquake), Korrina orders Lucario to use Bone Rush, and it mercilessly tees up Pikachu like a little yellow golf ball. 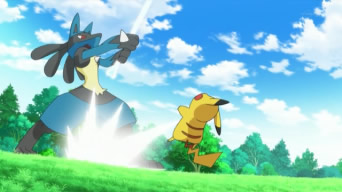 Poor Pikachu gets a taste of its own medicine and is sent flying off like it usually does to Jessie and James – finally landing next to Ash dazed, confused, and defeated.

Getting smacked around by some guy’s bone never really gets easier, no matter how often it happens to you.

With the battle over, Korrina informs Ash that he better rethink his plan of defeating the Shalour City Gym Leader – after all, he just lost to her. This news comes as a surprise to the assembled kids, but they do not have time to dwell on it because Korrina is hungry, dammit, and in a group full of women (and one asexual Peter Pan) it falls to the gender-role-bending Clemont to make lunch. 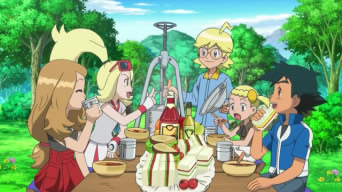 Korrina expresses great delight that the nerdy John Denver lookalike managed to make a gourmet meal by using what appears to be some kind of winepress invention and Bonnie blows the opportunity to propose marriage to the first girl in the whole of France to show even a modicum of interest in her big brother. Even Clemont should have been wise enough to employ the “Hey baby, I’m a gym leader too…” pick-up line to try and jumpstart some NeoGymShipping. (This must not be an effective technique in the Pokemon world, seeing as the perpetually-horny Brock almost never used it; preferring to creepily tell every woman he met that he was a “breeder”)

Bonnie happens to notice that Korrina is sporting a mega evolution keystone in her glove, and Ash manages the herculean task of remembering events from two whole episodes ago – recalling that Kalos Champion Diantha had one too. 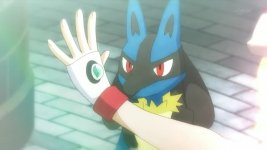 Korrina explains that the Shalour City Gym has a tradition of using Pokemon that can mega evolve, and she received the keystone as a gift from her grandfather. She does not, however, have the corresponding Lucarionite yet – which along with loving your Pokemon are the three well-established prerequisites for a mega evolution. (This begs the question, if the mechanics of mega evolution are so well-established, why is Professor Sycamore wasting his time trying to “unlock its secrets?” Perhaps it really is just a front for his globetrotting sexcapades…) Korrina mentions that she has been delaying setting out for Geosenge Town – where Lucarionite can be found – until she has racked up a string of 100 consecutive victories in a row; her latest win over Ash is her 99th straight win. (Sound familiar? 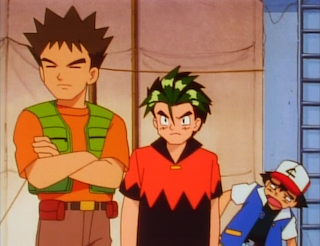 That’s because an arrogant Ash with two Kanto badges once became the 99th victim of a whip-cracking trainer named AJ and his Sandshrew. Hmm… I wonder if Team Rocket will provide Korrina with her 100th victory as well?)

It turns out that simply defeating the show’s protagonist isn’t good enough for Korrina. She tells Ash that she keeps a notebook with the footprints of all the Pokemon that she defeats in battle (what if she fights a Gastly?) and insists that Pikachu join her collection. So in yet another allusion to season one, Korrina grabs a bottle of ketchup off the table and uses it to add Pikachu’s footprint to her notebook, while simultaneously sending the electric mouse spiraling back into a relapse – ruining the recovering addict Pikachu’s streak of 787 ketchup-free episodes. 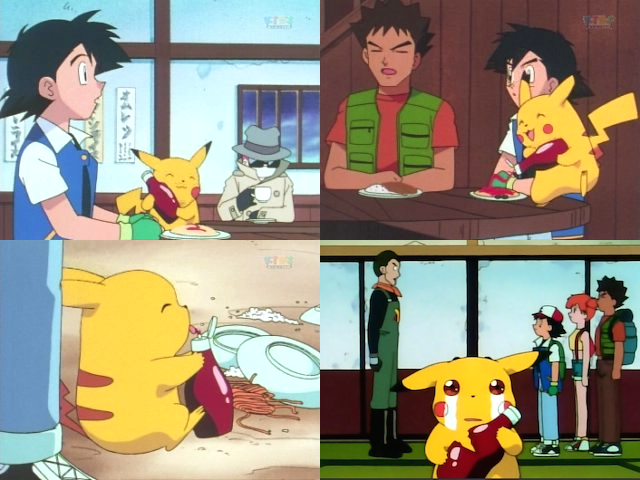 As it turns out, someone else has been listening in on the group’s conversation – who else but Team Rocket? They arrive on scene in a mobile fortune-telling booth with a Mismagius paint job. Jessie is sporting an updated take on her classic gypsy/Arab disguise (one that accentuates her ample bosom), while James is in a similar (but unfortunately male) version of Jessie’s outfit – complete with a ‘K’ necklace that Japonophiles would like us to think stands for “Kojiro,” but I would prefer to believe it was given to him by a possessive lover named Kevyn (or something equally gay). 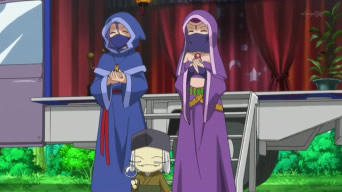 Team Rocket informs the twerps that they are capable of divining the moves that mega evolved Pokemon will obtain, and to that end they want to get Lucario and Pikachu into the truck for a “free” consultation – despite the fact that Pikachu cannot mega evolve (yet…it’s coming, mark my words). Korrina and Ash seem strangely reluctant to embrace the generous offer made by these kind foreigners (maybe they’re just racist?), but Jessie and James insist and hoist the two Pokemon onto the truck. Bonnie shows no traces of xenophobia, however, and openly wonders if her Dedenne might be capable of mega evolution as well. 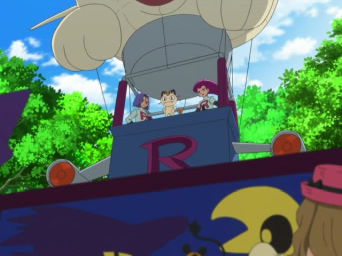 Unfortunately for our beautiful villains, the twerps quickly expose their lack of knowledge about mega evolution (apparently Team Rocket and Professor Sycamore are the only people in all of Kalos who do not fully understand how it works…). With their disguises unraveling, James decides to just screw it and skip ahead to the stealing by trapping Pikachu and Lucario inside some kind of electro-magnetic cage. The sides of the truck fold closed and Team Rocket strip down to their unis and recite the motto before taking off in the Meowth balloon with Pikachu and Lucario in tow.

Clemont picks this moment to steal the spotlight. As he does in most episodes, Clemont claims that he has an invention for just this occasion, and declares that the future is now thanks to science! Regrettably, nobody appears to be listening to him. Korrina has decided to take things into her own hands and trust in her paranormal “bond” with Lucario to guide her to Team Rocket’s location. Ash, who has never had a good relationship with science (he wakes up every morning in awe that the sun has returned after disappearing the night before), eagerly chases after the girl offering a magical solution for recovering Pikachu, while Serena follows close behind, determined to prevent Ash from being alone with another woman for even a small length of time. 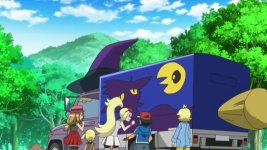 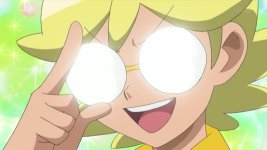 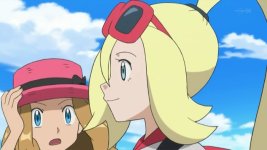 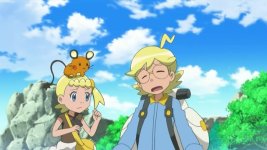 Bonnie and out-of-shape Clemont bring up the rear as the gang makes its way to a nearby cliff. Korrina uses this opportunity to elaborate on her backstory of growing up with Riolu/Lucario and explains that their incredibly close connection allows her to sense where Lucario is (apparently spending 16 plus years with Pikachu has not given dunderhead Ash similar insights). Meanwhile, Lucario and Pikachu team up to defeat Team Rocket’s “attack proof” cage. Lucario powers up with Swords Dance and Pikachu contributes an Electro Ball that eventually escapes through the supposedly impermeable cage material and punctures the Meowth balloon. Team Rocket’s diabolic dirigible crashes in a canyon and Lucario and Pikachu escape, which Korrina somehow “senses” (the smoke from the crash was probably incidental).

Team Rocket’s latest scheme may have quite literally crashed and burned, but our villains don’t give up that easily! Jessie, James, and Meowth emerge from the canyon with Inkay, Wobbuffet, and Pumpkaboo behind – and they are positively sashaying towards the camera! 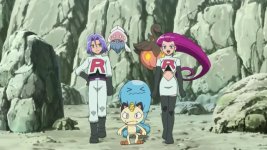 God knows, I love to watch Jessie strut. And oooh, James does respect the butt. It’s good to see that all these years later, even after two voice actor changes and increasing self-censorship of his visual flamboyance, James still feels like a woman.

Pikachu and Lucario take an initial ass whooping from Inkay and Pumpkaboo, but soon their slave masters arrive on the scene and the tide of battle turns against Team Rocket. Korrina orders Lucario to devastate Inkay and Ash has Pikachu dispatch the villains once again with an electrical blast off. 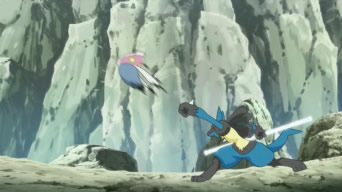 With the villains removed and their Pokemon returned safe and sound, Korrina discusses her travel plans with Ash and friends. Just as in Path to the Pokemon League, Team Rocket has kindly provided today’s featured character with her 100th consecutive victory, and as per her promise, Korrina is now off to Geosenge Town to hunt for Lucarionite. Well wouldn’t you know it? Geosenge Town is on the way to Shalour City! 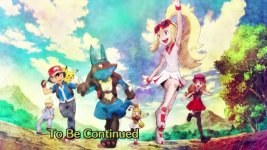 The gang proves more than agreeable to the idea of letting Korrina accompany them on the next leg of their journey (Clemont is positively scheming), and just like that yet another gym leader finds herself abandoning her independence to follow Ash Ketchum (the Jesus/Charles Manson of Pokemon) around the world. Welcome to the twerps Korrina, but be careful that Serena doesn’t murder you in your sleep!