Wherein Clemont joins Team Rocket and the villains get all meta.

As the metaphorical curtain rises on another episode of Pokemon, we discover that Team Rocket has already captured Pikachu. 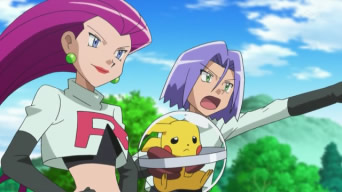 Wow, that was fast. No explanation is given for how the beautiful villains managed to get the electric mouse inside a Pikachu-sized hamster ball, but one can assume it involved some kind of needless disguise (God knows James loves playing dress-up), which anyone with more than a fourth-grade education (well, that eliminates most Pokemon trainers) would see right through. Unfortunately, Jessie and James have once again vainly chosen to stand and fight rather than taking the more sensible option of grabbing Pikachu and running straight to Giovanni. James calls out Inkay and Ash counters with Froakie. However, mean-spirited Clemont refuses to obey the rules of the noble sport of Pokemon cock-fighting and interferes in Ash and James’ battle with a new invention. 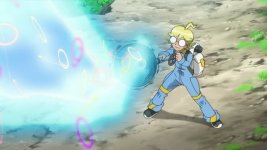 “Oh my!” declares James, almost achieving the campy tone mastered by his previous voice actor, Eric Stuart. Clemont absorbs and reflects attacks by both Inkay and Jessie’s Pumpkaboo, and Pikachu manages to free itself during the hustle and bustle of the battle. With his favorite weapon back, Ash once again attempts to commit murder, ordering Pikachu to give Team Rocket a lethal dose of voltage. (Surely this is a more egregious violation of the law than the thwarted thefts of Team Rocket? But then again, this is also France, the same place where Jean Valjean received years of hard labor for stealing a loaf of bread to feed starving children…) Clemont can only revel in the success of his machine for a short time however, as a patented Clemont-invention-explosion leaves him black-faced and afro-ed like an old-timey minstrel. 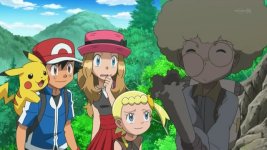 The camera shifts to Team Rocket laying in a clearing (and Pumpkaboo in a bush), recovering from their latest “blast off.” Meowth chastises his comrades for suggesting that they were close to finally succeeding at their latest theft. “Close times zero still equals zero,” declares the Scratch Cat Pokemon (who has apparently progressed to learning algebra, having already mastered human speech). But then Jessie gets an idea, an awful idea – Jessie gets a WONDERFUL, AWFUL IDEA. 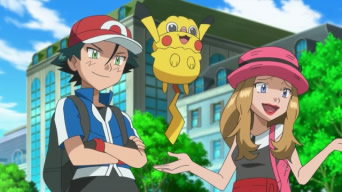 In what may be my new favorite disguise in the history of Team Rocket (right up there with inflatable breasts James, and James as a “flaming” Moltres), the villains have disguised themselves as the Kalos-era twerps. Talk about self-referential, Team Rocket has taken the meta antics of Community to another level by visually referencing the characters from the television show that they also happen to be in – inside that same television show! (All we need now is for DiCaprio to come and incept us into a deeper layer of self-referentiality) Jessie has somewhat regrettably taken the role of Serena, forcing James to don the garb of the perpetually-ten-year-old boy he has been stalking for years – right down to the lightening-bolt cheek marks. (You better believe if this was an original series episode that their roles would be reversed) 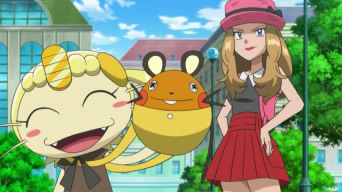 Meanwhile, Inkay has been done up as Pikachu, but the piece de resistance is definitely Meowth dressed up as Bonnie (how come he’s allowed to cross-dress, censors?) – complete with a Dedenne puppet! (Although judging by the Gob Bluth level of lip movement on Meowth, he is not that good of a ventriloquist)

It ain’t easy being orange.

Team Twerpet comes across a young trainer and his Pancham playing in the park and James propositions him (for battle that is). 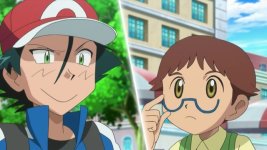 He enthusiastically declares that he is “Ash Ketchum, from Pallet Town,” which ends the long-running debate over whether Jessie and James actually know the names of the children they have spent varying lengths of time following around the world. (They usually stick to such nomenclature as “twerp(s),” “twerpette/girl twerp” “angry red-haired twerp” (for Misty), “older twerp” (for Brock), and variations on that theme) The boy is intrigued by Pikachu – having never seen one that floats before – but declines to battle with this “Ash Ketchum from Pallet Town.” Well, James never takes no for an answer from young boys he propositions in parks, and he orders his “Pikachu” to attack Pancham – using Psybeam! “We train hard!” declares James in the most butch voice he can muster, explaining why his floating Pikachu can also use psychic type attacks. 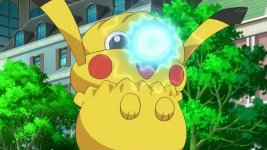 Showing no mercy, Inkay finishes the nonconsensual battle (technically an assault, I guess) by Tackling Pancham into submission. Pancham’s bespectacled trainer prepares to go crying off to Officer Jenny, and Team Rocket tries to make her police report as detailed as possible by once again reiterating loudly that they are Ash Ketchum of Pallet Town, Serena from Vaniville Town, and Bonnie from Lumiose City.

Next, our villains head into town and hit up a food vendor. James, still disguised as Ash, is unable to control his maneater instincts and suggestively crams a hot wiener into his mouth. 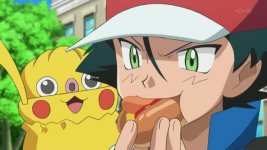 I hear that in England they call it a “banger in the mouth…“ Having dined, Team Rocket proceeds to dash, once again loudly declaring their assumed identities. They continue to help themselves to food around town, each time leaving without paying and directing the blame towards Ash Ketchum and friends (although how this is any different from Ash’s normal freeloading behavior is not specified).

The genuine twerps belatedly make their way into town and begin to encounter the people that they have supposedly been wronging all day. Entering the Pokemon Center, they are cornered by Officer Jenny and her pissed-off posse of local shopkeepers. It is surprising to see a Jenny actually get off her ass and do something about combating crime, but she was probably motivated by the chance to shake down this “Ash Ketchum” and friends for bribes in exchange for overlooking their transgressions. 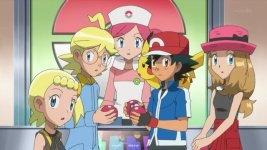 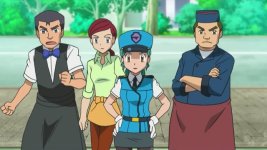 However, it soon becomes clear to Jenny that these are not the twerps she is looking for, and rather than punishing them anyway (as is her sadistically corrupt wont), she makes the financially wise choice to let the penniless Pokemon trainers go and raise the protection fees on the shopkeepers instead, to motivate her to make an arrest next time their stores are robbed. She does, annoyingly, have to bring the kids down to the station to fill out paperwork and keep up the illusion of a just and democratic Kalosian society governed by the rule of law. While this is happening, Clemont remains behind at the Pokemon Center and is approached by Jessie and James – who are completely unrecognizable, having disguised themselves with glasses and surgical masks. 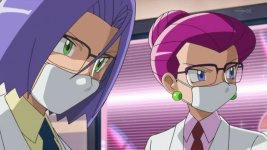 They tell the Lumiose City Gym Leader and John Denver lookalike that they are scientists who need help with a machine that will be able to defend against the attacks of a nefarious electric Pokemon. Clemont sees nothing suspicious about this, and follows the two “scientists” to their darkened warehouse laboratory. Once inside, he sketchily asks his hosts, “Do you mind if I examine your equipment?” and James readily agrees – by yanking off the blanket covering an unfinished Heliolisk mecha. 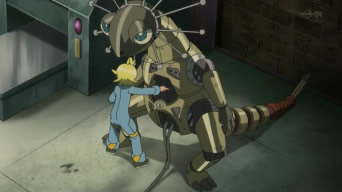 Having recruited an unknowing new member into the ranks of Team Rocket, Jessie, James, and Meowth scurry off to okay the new hire with corporate. 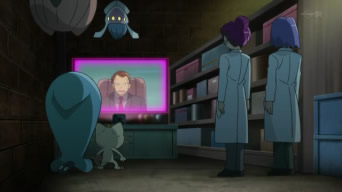 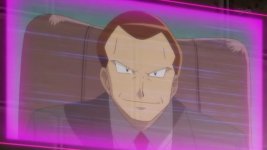 Yes, Boss Rocket makes his long-awaited reappearance to check on his agents’ progress at acquiring Kalosian territory for the Rocket crime family. He actually seems pleased with their captures so far (all two Pokemon’s worth) and the trio promises that they will soon have even more good news to relay. In the mean time, Clemont has finished his modifications on the Heliolisk mecha, and when Jessie and James mention a transportation device that could also use some improvements, Clemont gets to tinkering again.

Back at the Pokemon Center, Ash, Bonnie, and Serena are still stewing about being falsely accused for crimes earlier in the day (although I can’t help but notice they are enjoying some presumably unpaid-for food in the cafeteria). Ash angrily vows to get to the bottom of this strange mystery right away (tomorrow)! Meanwhile, James finishes burying something out in a field… (Perhaps Giovanni was having problems with French labor leaders and ordered a Jimmy Hoffa type hit earlier during the conference call?)

The next day, Team Rocket are back in their twerp disguises and are once again chowing down on free food at the cost of Ash’s reputation. The actual twerps are soon hot on the trail, and track the villains to the same field where James buried something the night before. 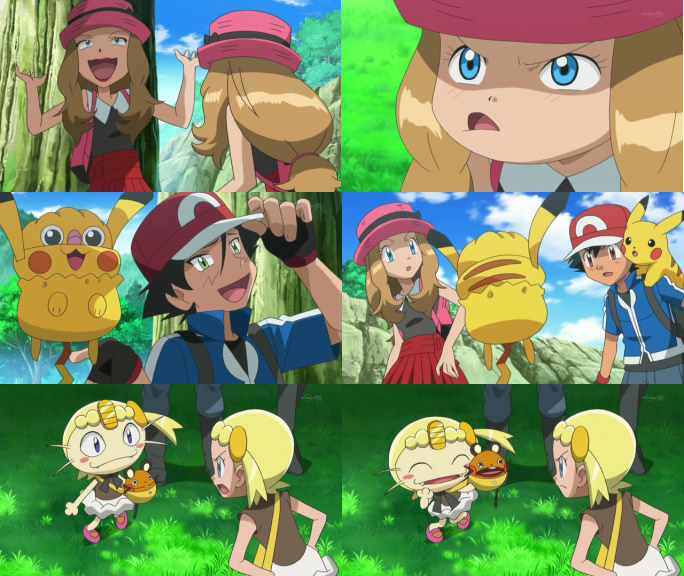 Serena is not at all amused at being upstaged by a true fashionista in Jessie, while dumb-Ash seems legitimately concerned for a moment when viewing Inkay-chu that maybe he is the impostor. This is quickly resolved when the villains shed their twerpish disguises and recite the hallowed Team Rocket motto.

The dastardly trio next reveal the extent of their episode-long planning and unleash the Heliolisk mecha that Clemont labored so hard to perfect. This does not come as welcome news to the fair-haired inventor, who just now realizes that he has been working for Team Rocket. 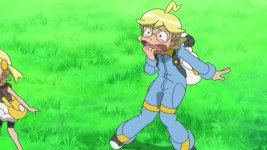 For his part, Ash fails to understand the meaning of basic speech (typical), and repeatedly orders Pikachu to shock the Heliolisk mecha, despite the fact that he was already told it was specifically designed to redirect special attacks. 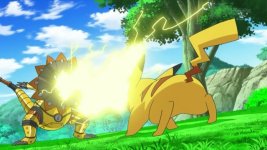 Team Rocket’s future is now, thanks to science!

This initiates phase two of Team Rocket’s dastardly plan. They trap Pikachu inside one of the hamster balls from earlier in the episode and Jessie quickly shoves it inside the transportation device that Clemont also helped the villains to complete. The twerps can take some solace in the fact that the Heliolisk soon goes the way of all Clemont’s inventions and violently explodes – sending Team Rocket blasting off for the second time this episode. And although the terrible crash landing that awaits them could be the end of the world as they know it, Team Rocket feels fine; Pikachu has been successfully transported through the hamster ball tube! 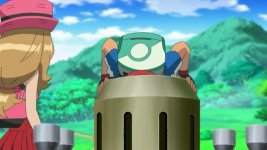 Ash dives head first for the hole at the end of the transportation machine (in a symbolic display that certainly got Serena’s heart racing), but the newest girl in Ash’s life decides to intervene before he gets permanently stuck. Clemont remembers that the transportation device he helped construct has a mile and a half long tube, and after using Bunnelby to ascertain which direction the group should go, the kids take off after Team Rocket.

As luck would have it, the villainous trio were blasted off to the exact location where the transportation device ends, and they are just about to escape in their Meowth balloon when the twerps arrive on the scene. Clemont tries to make up for his earlier collaboration with the enemy by unleashing his upgraded attack reflecting invention from the beginning of the episode. And in a case of deja-vu, Clemont once again deflects attacks from Inkay and Pumpakaboo, Pikachu is freed, Team Rocket is blasted off one final time, and Clemont’s invention promptly explodes – leaving him blackened and afroed once more. 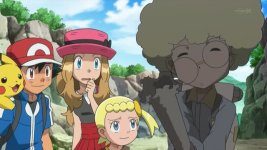 It’s the circle of Pokemon.