Wherein the gang spends an entire episode looking for a flower and Team Rocket gets high.

This is not a very good episode. It follows your basic Johto filler-episode plot: Ash and friends meet a new Pokemon and a character of the day with a problem, the gang attempts to solve the problem while Team Rocket attempts to make everything worse, and finally the problem is resolved. However, this episode does provide a good example of why Team Rocket is so important to the show. As is often the case, the TR trio does their best to redeem an episode containing a boring and childish story with their adult antics – and in this instance, they save the episode from a dreaded “1 Staryu” rating.

The story begins with Bonnie having a bad hair day, and already your “forgettable filler episode” senses should be tingling. 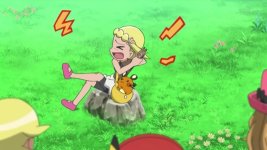 Not that filler episodes are necessarily bad, a good chunk of my favorite episodes are ones in which the writers creatively strayed from the plot of the video games (i.e. Holiday at Aopulco, The Ghost of Maiden’s Peak, Holy Matrimony, the entire Orange Islands arc, etc.). I am firmly opposed to the popular fandom concept that “filler episodes” are bad and all other episodes are good. I get bored during some of Ash’s gym battles, and often times the writers will try to “redeem” an otherwise forgettable episode with a needless evolution or new Pokemon capture (thus making those episodes not filler, by definition). But getting back to the gist of this episode review, it’s not that Bonnie having a bad hair day should necessarily result in a poor episode (Bonnie is actually one of my favorite characters in this generation, she’s basically a more likable Max), it just seems like a less-than-promising place for the writers to launch from.

So anyway, Bonnie is having a bad hair day, and Serena tries to make everything better by giving her a new ‘do featuring a flower that Serena just happened to have inside her skirt pocket. Bonnie is overjoyed at her new flowery hairstyle, and she isn’t the only one. Suddenly a tiny life-form drifts in on the breeze and plants itself on Bonnie’s head. No, it isn’t an alien brain parasite, it’s Flabebe – the world’s smallest Pokemon. 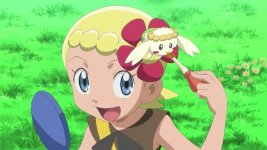 Bonnie notices that Flabebe does not seem to be very happy, and once again Serena intervenes with her arbitrary-plot-device-creating inventory of items. She reaches into her bag and produces flower nectar, which Bonnie feeds to Flabebe with a small eyedropper that Clemont carries around for “experiments.”

The nectar seems to make Flabebe feel better, and Bonnie implores her older brother to capture the Single Bloom Pokemon for her as he did with Dedenne earlier in the season. Clemont acquiesces and proceeds to rap Flabebe on the head with a Pokeball, and then seems genuinely surprised when this does not produce the desired effect (um hello, you’re supposed to beat the shit out of it with Chespin or Bunnelby first – aren’t you a Gym Leader?) 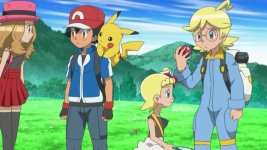 The gang realizes that this might be a sign that Flabebe already has a trainer, but they continue on to the next town with the stolen property anyway.

But no sooner has everyone arrived in town than: 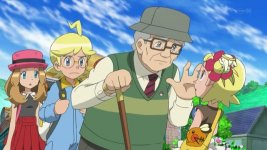 Bonnie gets attacked by an old man. But as it turns out, the geezer (named Gray, of all things) is not a brazen daylight street pedophile, but is actually the owner of the Flabebe nestled in Bonnie’s hair. Apparently his wife is sick and in the hospital, and to add insult to injury, her Flabebe has lost its symbiotic host flower. Having now met the featured Pokemon and the character of the day, we are presented with the episode’s driving problem – finding a new flower for Flabebe. 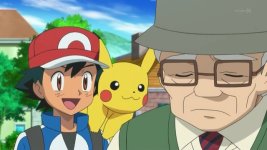 Dumb-Ash offers up his stupid solution, “I’ll just go to a flower shop!” (And do what, rob it? You don’t have any money!) Unsurprisingly, Ash’s suggestion isn’t all that useful, as it actually had occurred to Gray to buy a replacement flower, except that Flabebe is partial to a specific rare variety called a Fairy Flower that cannot be bought in stores (a fairy flower eh, is James nearby?)

The gang promises to find a Fairy Flower for Gray and they head to the Pokemon Center to ask Nurse Joy for her advice. She tells them that Fairy Flowers are out of season, but they might possibly be found in a meadow nearby. All this talk of fairies must have made the ears of a certain someone burn, because Team Rocket are here listening in – spying through peepholes they have cut into newspapers (a skill that James refined back in his school days in the boy’s locker room). 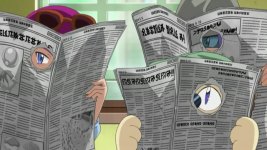 Ash and friends prepare to set out on their Fairy Flower expedition, and they are fortunate to come across three professional Fairy Flower guides (how convenient!) Despite this being French Kalos, the Japanese Team Rocket – apparently thinking that all white people look alike – have decided to disguise themselves in the garb of France’s frequent nemesis, the Germans (check out that fabulous Fairy Flower belt buckle James is sporting, and is it just me or does Jessie look extra hot today without her lipstick?). 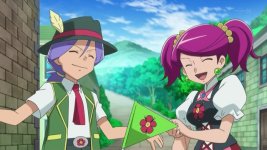 Fortunately, this is Ash we are talking about, so nobody seems to notice their Teutonic get-up, or that the smallest tour guide has a fur-covered face – not to mention paws. This is especially advantageous because Team Rocket’s attempts at German accents fall pitifully short, landing somewhere closer to Midwestern Scandanavian (Doncha know!), except for Meowth, who actually sounds Irish of all things.

Team Rocket surprisingly does a bang-up job of leading the twerps to a Fairy Flower, and it falls to Bonnie to take Flabebe up the craggy cliff to reach it (rather than, you know, shooting it up on a Vine Whip, or flying it up on Fletchling). However, while everyone is occupied watching Bonnie free climb, Meowth manages to snag Pikachu with a mechanical backpack arm that would put Clemont’s wimpy Aipom arm to shame. The twerps whirl around, and Ash expresses surprise at why the nice German tour guides have stolen his Pikachu. 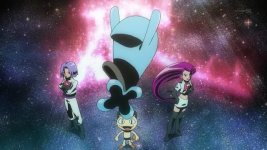 GASP! IT WAS TEAM ROCKET ALL ALONG! (Jessie apparently found time to re-apply her lipstick too while the costume change was going on)

Ash, Serena, and Clemont send out their Kalos starters against Wobbuffet, Inkay, and Pumpkaboo. The Patient Pokemon proves more than a match for the twerps, and sends them scrambling as its comrades lay down some suppressing fire. But just when it seems that Team Rocket will finally win the day, Flabebe finishes combining with the Fairy Flower and swoops in to render Team Rocket unconscious with the sweet perfume of its medicinal herbs. 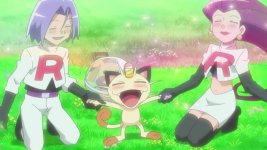 Meowth manages to resist the effects of the Marijuana Pokemon the longest, but he finally gets a whiff of Flabebe’s stinky weed, and like most pot-heads, he takes a sudden interest in the poetry of John Lennon. “Turn off your mind, relax, and float downstream…” Meowth muses, while advocated drug use to the show’s impressionable audience of children.

With Pikachu freed and Team Rocket in a drug-addled stupor, the twerps decide to return to Gray and his wife with Flabebe.

For once Ash resists the temptation of sending Team Rocket blasting off again to their probable deaths, preferring to leave them to die of a drug overdose like Walt in Breaking Bad.

So that’s that. Flabebe returns to Gray and his wife at the hospital, and Ash can take pride in solving the mundane problems of another random stranger that he will never see again. But rather than dwell on that, let’s end this review with another look at Team “high as a” Rocket, and the hope that next week’s episode will be better. After all, Tomorrow Never Knows… 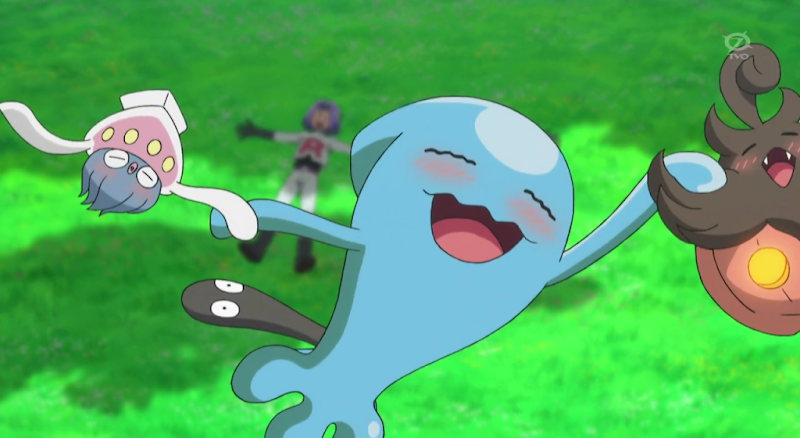