Wherein multiple girls fight for the right to have Ash sample their muffins and Pokemon decides to tackle the controversial topic of gang rape. 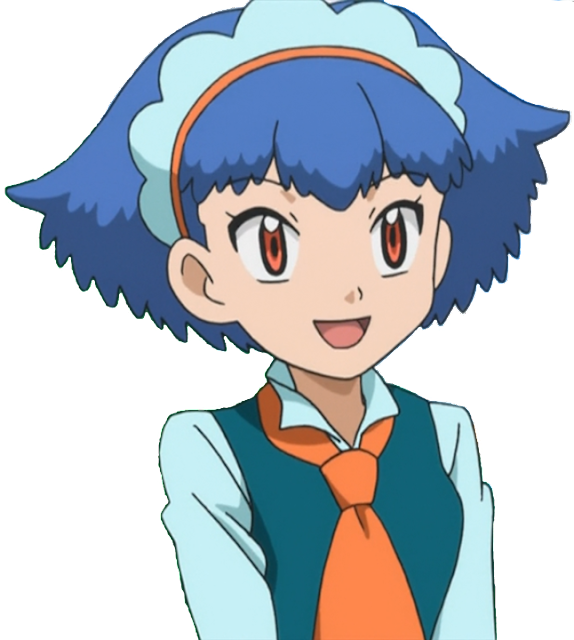 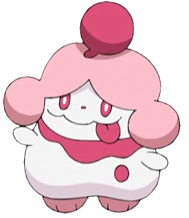 When we last parted ways with Ash and company, the group was in Cyllage City where our brainless hero earned his second Kalos gym badge from Grant – the black spider-man. Episodes immediately following gym battles have a history of being filler-heavy, but let us not pre-judge, lest we in turn should be pre-judged (that’s the attitude Jesus brings to episode reviews, as well). So off to the show then.

Right off the bat, Serena presents some pastries she has made to the fickle Fennekin. She calls these creations Poke Puffs, which is odd because James is nowhere in sight… In any event, Ash sees Pikachu and Fennekin chowing down on some food and thinks to himself, I have to get me some of that action. 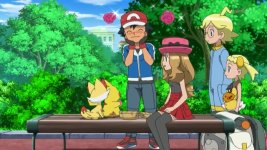 As a nervous Serena looks on, Ash presses his mouth against her moist frosted muffin – and declares that he loves the taste (he is an Oak boy after all)! This is the single greatest day of Serena’s life – and it keeps getting better! 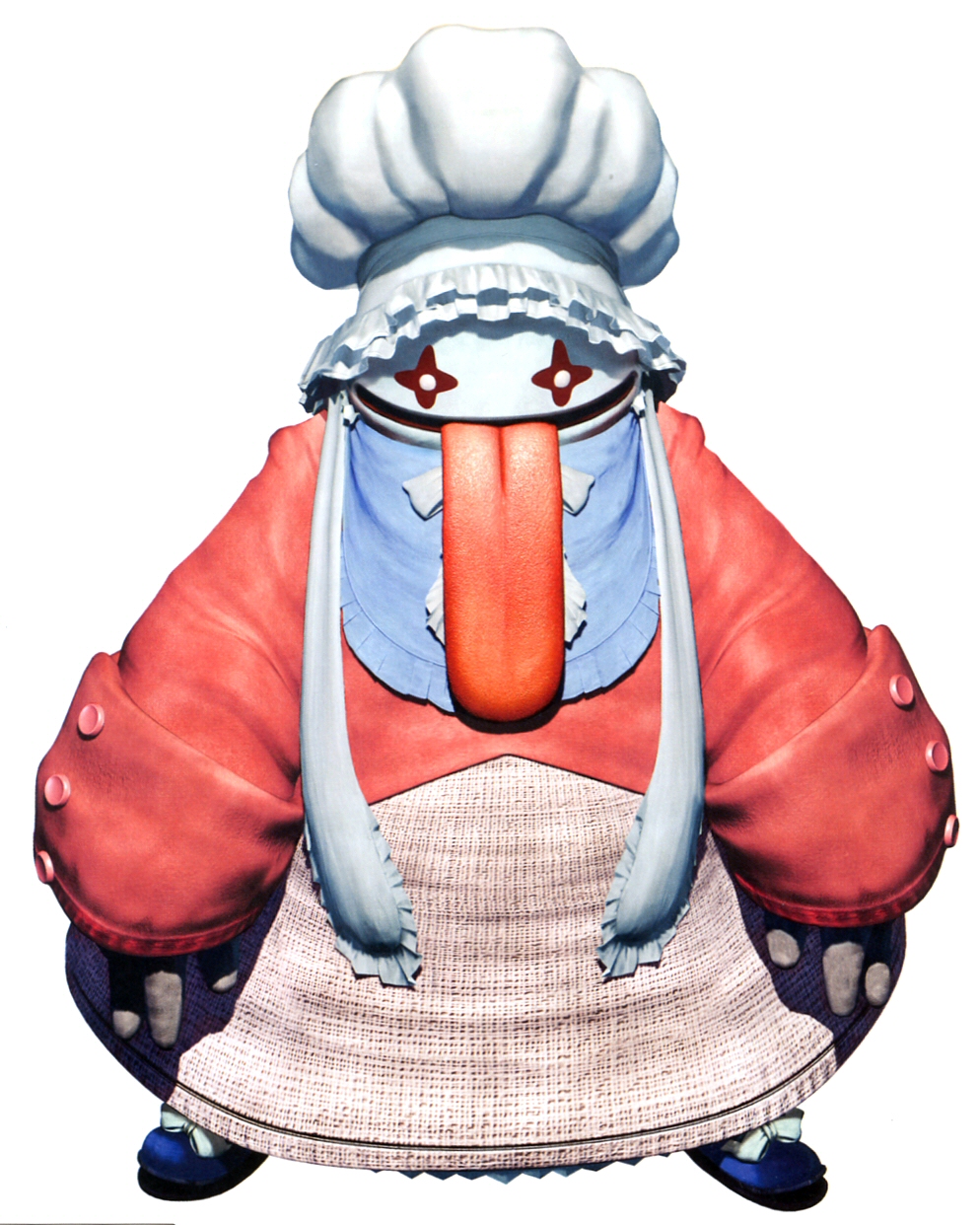 Ash apparently couldn’t be satisfied with just one mouthful and dives in for another, but his Poke Puff is liberated by a little fat Pokemon with a prominent tongue that bears a strong resemblance to Quina from FFIX. It’s Slurpuff – the meringue Pokemon.

This distraction was undoubtedly unwelcome to the legions of fanboys living in their parent’s basements who were obviously hoping that Ash and Serena were about to take their relationship to the next level with all that muffin munching. 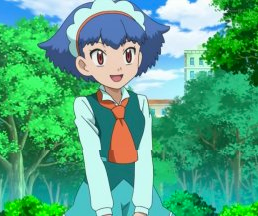 Luckily for them, the show’s animators are just as creepy and socially-awkward as they are. For who should we meet next but Slurpuff’s trainer Miette, a combination French maid and Japanese schoolgirl.

Serena, however, is slightly less than happy about the unexpected incursion on her private time with the suddenly-hot-for-her-muffin Ash. 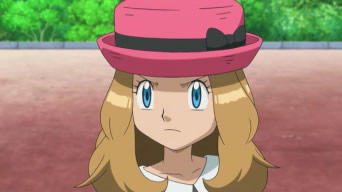 Miette cuts right to the chase and offers her frosted muffins up to all takers – and Bonnie, Ash and Pikachu quickly raise their hands/paw. It turns out that Bonnie was actually asking for a Poke Puff for Dedenne – but dumb-Ash sees no reason why he shouldn’t join Pikachu in chowing down on the Pokemon equivalent of dog food. 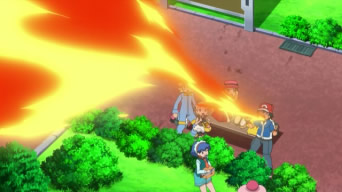 Miette warns Ash that Poke Puffs are not designed with human tastes in mind, but Ash soon finds this out for himself. See what happens when Brock isn’t here to mother Ash? He can’t even feed himself!

Well Serena sure doesn’t appreciate another woman coming around and offering her muffins to Ash, especially right after she just discovered that Ash would willingly munch on her muffin. The two ladies start shooting literal daggers (or rather some kind of light-beam shuriken thing) at each other. 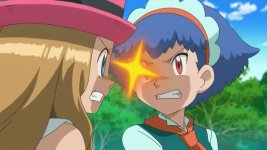 Clemont sees this an opportunity to insert himself between the two women (probably hoping for an opportunity to cop a feel while “restraining” them), but Bonnie does a better job of defusing the situation by pointing to a flyer advertising an impending Poke Puff baking contest (how convenient) – and so Miette and Serena vow to settle their beef in the kitchen.

The next scene opens with the Poke Puff contest already underway (even the announcer’s microphone is topped with one). Various bakers are here competing with the “help” of their Pokemon (that doesn’t seem very sanitary): there is Serena and her Fennekin, Miette and her Slurpuff, and the “Berrybaker kids,” two youths straight outta feudal Japan with a mallet-wielding Makuhita (I gotta believe they won’t be allowed to return home from France with the dishonor of losing – this baking competition has do-or-die consequences); but most importantly there is this fabulous trio, featuring the original Poke Puff himself: 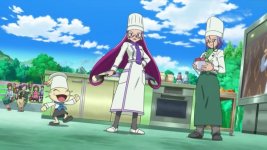 All the competitors get to baking and Serena lets us in on her secret Poke Puff ingredient (twigs; as in little pieces of wood). The other contestants also show off their creations to the camera (but you have to wonder why they even try since they aren’t even important enough to have names; they clearly aren’t going anywhere). Team Rocket discovers that their natural affinity for the arts does not extend to cooking (Jessie can probably be forgiven here, you can’t burn a snowgasboard), and Gena the Poke Puff expert makes an appearance to announce the contestants moving on to the next round. 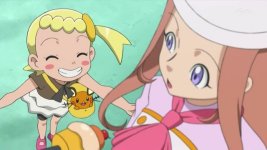 Bonnie wisely deduces that a famous Poke Puff master would make a good wife for her loser brother, and once again proposes for him, so as to be free of the burden of taking care of him once and for all. Clemont is so embarrassed that he not only drags his sister off the stage with his mechanical Aipon arm, but he runs away like a baby through the crowd and across the French countryside.

All this talk of weddings (and more importantly wedding nights) is revving Miette’s engines, so she sashays up to Ash and Serena, provocatively sits down next to the brainless wonder, and asks him, “so Ash, do you already have someone to take care of you?” 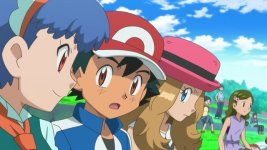 The look on Serena’s face alone is priceless, but Ash provides the perfect clueless comeback, “What are you talking about?” (Meanwhile, somewhere in Kanto, a certain Tomboyish Mermaid breathes a sigh of relief and takes a step back from the ledge). Back on stage, Gena announces the three winners of the first round: no surprises here, they are Serena, Miette, and the only other named contestants, the Berrybaker kids. 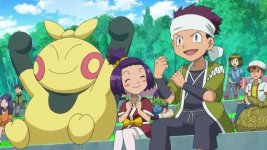 This is excellent news most honorable sister. We must now honorably win the contest with the help of faithful Makuhita or else commit suppuku on the spot rather than dishonorably return to our village in shame!

Serena books it for the market to stock up on berries for the second round bake-off. Unfortunately she discovers that the shelves are more bare than a supermarket in Soviet Russia (if only there was some snow around…it would finally be Jessie’s time to shine!) Miette is also frustrated by the sudden berry shortage (according to my former economics professors, this is undoubtedly a consequence of the leftist Kalos state interfering with the functioning of the free market), and she and Serena do not need any prompting to blame each other.

If you look closely at Miette during these scenes, you will notice that the pervy animators have decided to give the presumably-also-ten-year-old a bit of a bulge in the crotch region (at least they didn’t go full camel-toe, or this show would start airing a lot later at night). Clemont, it appears, has also noticed Miette’s feminine charms and has dissolved into despair over the thought of two nubile young women angrily lusting over Ash, who wouldn’t notice them even if they were naked mud wrestling right in front of him (ooh look, a Pidgey!)

Bonnie and Ash suggest heading off to the forest to forage for berries themselves. Once they arrive, however, they discover that someone or something has been wreaking ecological terror (somewhere near the North Pole, Al Gore comforts a polar bear cub sitting on a melting ice cap as a single tear rolls down his cheek). Suddenly, the gang hears a shrill cry echoing from deeper inside the forest. IT’S SERENA! SHE’S MISSING! The gang rushes ahead to find her, but it is not a pretty sight. Younger or more sensitive viewers might want to look away, for it seems that Pokemon has decided to randomly broach the controversial subject of gang rape. 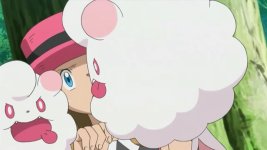 Serena gets forced up against a tree by a group of Swirlix with tongues-a-waggin’ and impure thoughts on their minds. Fennekin jumps in to rescue its trainer, but one overexcited Swirlix spins around and unloads all over Fennekin’s face, before going back to doing unmentionable things to Serena with its tongue. 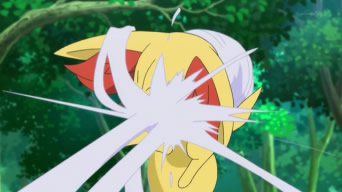 Fortunately, Serena’s knight in stupid-armor arrives before any penetration can occur, and orders Pikachu to shock the crap out of the Swirlix. “I’m all sticky!” complains Serena, which was an unnecessarily dirty line. For her part, Miette decides to join in the ugly culture of victim blaming, telling Serena “it’s your fault,” (look what she’s wearing, she was asking for it) and derisively dismisses her plight. Meanwhile, Bonnie decides she wants to capture one of the little Pokemon rapists (Clemont tactfully refuses), which gives us an interesting, if slightly frightening, glimpse into her psyche. 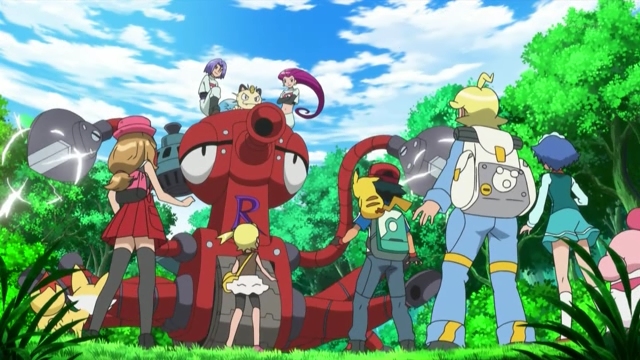 Yes, it seems that it was everyone’s favorite criminal trio who were responsible for the shortage of berries. Because if Jessie can’t win the bake-off, then no one can dammit! Team Rocket’s newest plan involves using their Octillery mecha to do what they do best: suck, and they trap the Swirlix and Pikachu in their eight-legged vacuum. Unfortunately for them, they did not factor dumb-Ash’s willingness to sacrifice his own body into their plans. Ash clogs up the vacuum with himself, which forces Team Rocket to stop sucking and start blowing. 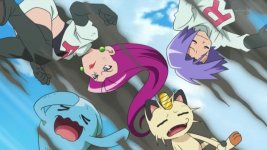 Regrettably, this also serves to free Pikachu and the Swirlix sex criminals from the mecha’s prison chamber. The twerps decide that a group of known rapists is the lesser of two evils and teams up with them to send Team Rocket blasting off again!

Back at the Poke Puff contest, everyone is eagerly anticipating the announcement of the winner. Who will it be Serena? Or Miette? Because it couldn’t possibly be those unimportant background characters the 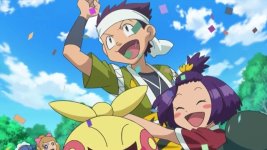 HOLY CRAP IT’S THE BERRYPICKER KIDS! Heaven smiles upon us today most honorable sister! Now we shall live to see tomorrow’s sunrise!
Yeah, that’s what you get for wasting the whole episode running around the woods with your friends instead of staying home and studying muffin baking like the Berrypicker kids, you lazy white girls!

Seeing as they both lost the baking contest that was supposed to determine who won their blood feud, Serena and Miette have decided to bury the hatchet. However, Miette cannot resist getting one last dig in at Serena before she goes (as well as lettering her know where she wants Ash to bury his hatchet). 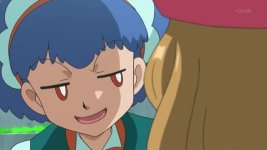 “Either you tell Ash how you feel about him,” she whispers, “or I will.” Dream on, bitch. There is a line of girls waiting to get a hold of Ash’s Pokeballs a mile long. Females literally give up their entire lives to follow him to the ends of the earth, as if he were some kind of moronic messiah, and in return they get even less action than Mother Teresa. Nevertheless, Serena departs comfortable in the knowledge that Miette is most likely bound for the land of one-off-character-of-the-day purgatory, whereas she still has two to three-and-a-half more seasons plus a few movies with Ash to try and make AmourShipping a reality.

Meanwhile, somewhere in Kanto, Misty drains her fourth glass of wine of the evening while chuckling softly to herself. Good luck with that Serena, you bitch!