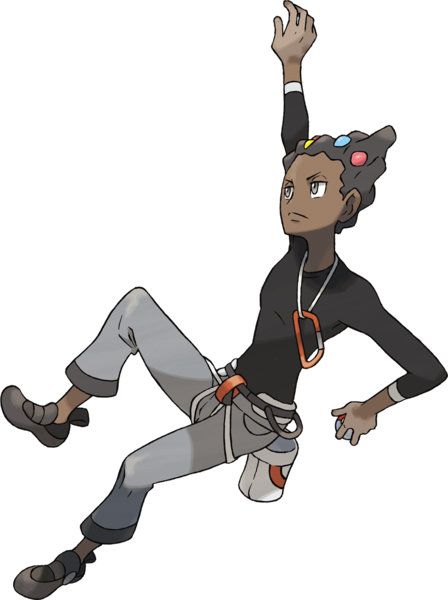 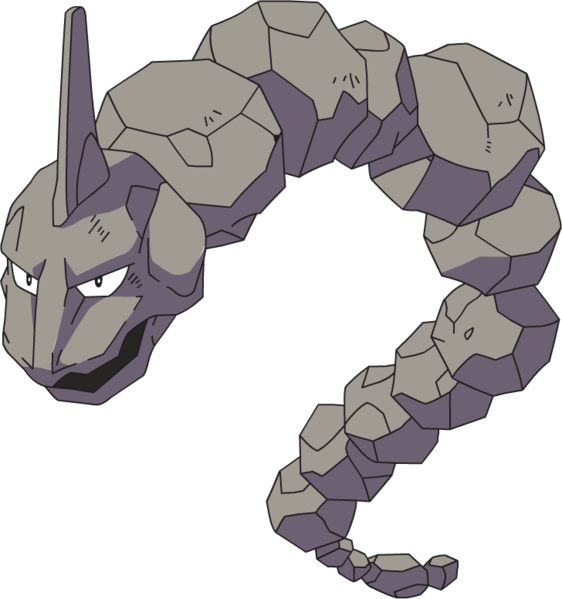 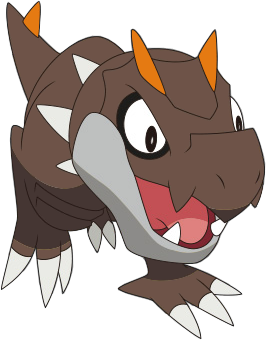 After what seemed like forever (but not in Johto time, thank goodness), Ash and company have finally made their way to Cyllage City – home to Grant and his Cliff Badge. 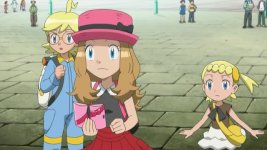 The desire to get to his next gym battle is so great that Dumb-Ash goes rushing off half-cocked in the wrong direction, until his girlfriend is kind enough to point this fact out to him – causing him to skid to a stop. 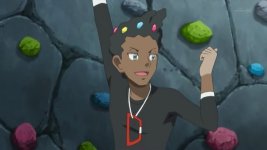 The gang make their way to the Cyllage City Gym/Grant’s mountaintop lair (what is he, a Bond villain?) and discover the black spider-man doing what he likes to do best – climbing up a wall. It is here that they learn Grant’s one qualification for potential challengers: no fatties! 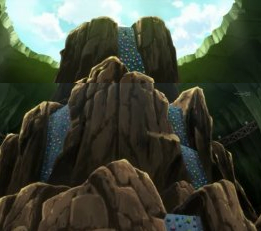 In order to face him in battle and fight for a Cliff Badge, challengers must first scale a cliff themselves and prove their manhood.

This plot line is strongly reminiscent of one of the most sexually-charged episodes of Pokemon’s most ship-tastic season: 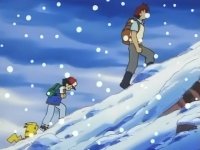 Having gone through this all before with Danny (and then unceremoniously discarding the girl he went through so much effort to prove his manliness to), and possessing more guts than sense, Ash promptly accepts Grant’s challenge – even after the gym leader admits that there is also a perfectly good elevator Ash could use. 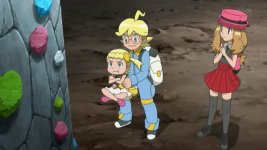 Bonnie also accepts Grant’s challenge (being more man than Clemont could ever hope to be), but her flabby nerd of a brother pulls her off the rock wall and makes her accompany him and Serena in the elevator (Clemont was probably afraid to be in alone in an enclosed space with a girl for the first time).

In a much shorter time than one would expect, Ash reaches the summit of Grant’s rock wall, and now has to prove his wisdom to the rock master before their battle can commence (Ash is in serious trouble, but he doesn’t have the sense to know it). “What were you thinking about while you were climbing?” asks Grant. Ash pauses for a moment to reflect on his climb before replying in typical dumb-Ash fashion, “I wasn’t thinking about anything!”…

“Perfect!” declares Grant, as evidently this was the answer he was searching for all along – apparently it makes Ash some kind of zen Jedi master or something.

But there is yet another thing Ash must endure before the battle can actually begin – Grant’s forced metaphors about how he is the “wall” that Ash must successfully climb before he can ascend to the Cliff Badge and yada yada yada; we get it dude, you like climbing things. 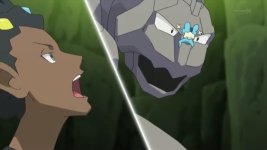 With all that out of the way, it is finally time for Ash to get down to battling with Grant – and the gym leader’s first Pokemon is no surprise, every rock trainer’s favorite: the phallic rock-snake Onix. Ash has seen this particular Onix before, in a Battle Chateau clash between gym leaders Grant and Viola that caused the latter to come down with a bad case of jungle fever. Grant managed to literally crush Viola’s Pokemon on that occasion by unleashing a tremendous Rock Tomb attack. Ash, however, is confident that his little Froakie matches up perfectly type-wise with Onix (certainly better than Pikachu did against Brock’s Onix in Showdown in Pewter City, although Brock’s Onix was much less…substantial…than Grant’s massive specimen). 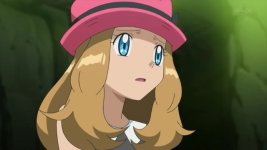 Ash’s wannabe girlfriend is far less optimistic about Froakie’s chances, and seems visibly worried that Cilan is about to make a surprise reappearance in order to create some kind of fried frog-leg dish out of whatever is left of Froakie after Onix finishes thrashing it. This leads to an awkward moment when Bonnie and Clemont get curious as to why Serena is getting so worked up over Ash’s battle, but Serena manages to pass it off as simple platonic concern and delays public recognition of AmourShipping for the time being.

But as it turns out, Serena’s fears are actually unfounded. It seems that Ash actually (dare I say it?) studied how Grant won his Battle Chateau match and used the intervening filler episodes to formulate a counter strategy. 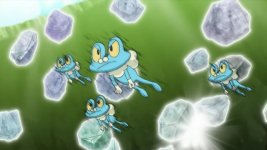 Ash orders Froakie to use its superior speed to hop up the individual boulders of Onix’s Rock Tomb, and when this doesn’t prove to be enough, Froakie summons his inner Keanu Reeves to Matrix-dodge Onix’s tail. Having just come within inches of getting slapped in the face by Onix’s “iron tail,” Froakie decides to end things before Onix can deliver the full facial experience. In true ninja-frog fashion, Froakie hops up Onix’s body and delivers a devastating Water Pulse at close range – Froakie wins! 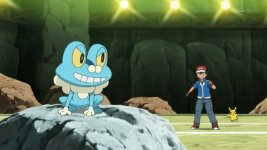 Naturally, Froakie is feeling a bit cocky after defeating Grant’s giant rock-hard stand-in penis. But the Cyllage Gym Leader isn’t ready to throw in the towel quite yet. Grant reaches for another Pokeball and calls out a brand new Rock/Dragon type Pokemon – Tyrunt: the Royal Heir Pokemon (geez, even this guy’s Pokemon has a noble title…) Tyrunt is like a baby t-rex, with jaws that Dexter describes as strong enough to crush cars (strange that a franchise that is identified so heavily with the nineties took this long to create a dinosaur Pokemon based on the tyrant lizard king).

Ash has Froakie employ the same speed strategy against Tyrunt that worked so well on Onix. Unfortunately for them, Grant has apparently borrowed the Black Materia from his buddy Sephiroth and orders Tyrunt to call forth (Draco) Meteor to rain down death from the sky. 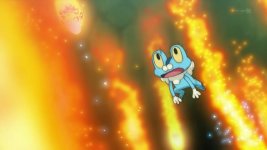 Ash’s pre-battle planning failed to provide a contingency for cascading fireballs of doom (that’s it, no more studying!) and Froakie is eliminated from the match. Realizing that he can use all three of his Pokemon to Grant’s two, Ash decides to ham it up a bit before bringing in the big guns and sends out the ridiculously tiny Fletchling to battle Grant’s mighty rock dinosaur. 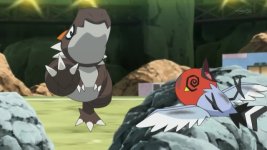 Being a small bird, and lacking Taillow’s ability to take a Rocky Balboa amount of damage and keep fighting, Tyrunt wins the match with one swift bitch-slap of its Dragon Tail.

Grant doesn’t realize it, but he is in serious trouble. Ash is down to his last Pokemon, that’s true, but that Pokemon happens to be Ash’s level ten-billion Pikachu, and this battle is taking place in a Pokemon gym, not the Pokemon League. You see, Ash is like the San Jose Sharks of the Pokemon world (yeah, that metaphor just happened, deal with it). 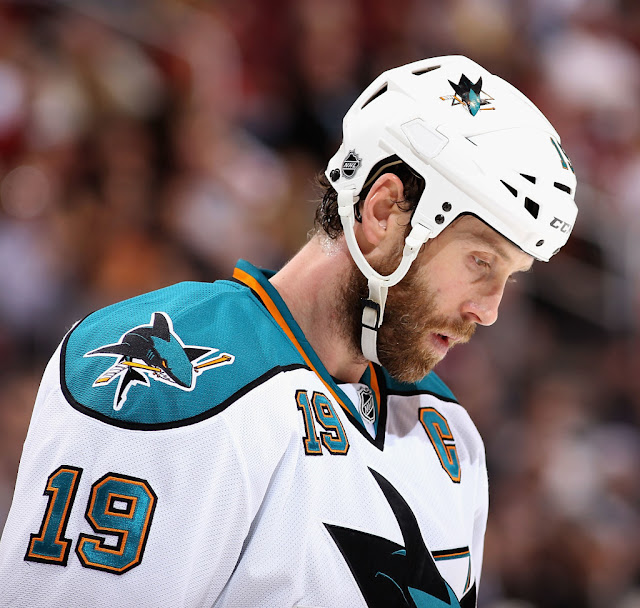 He’s lights-out in the regular season, which in this case are gyms, random Pokemon-related contests, and battles along the way, as well as the minor league Orange Crew and Battle Frontier. Ash rarely loses in these competitions (every now and again he has to re-battle a gym leader, but he always wins the rematch), but when playoff time arrives and Ash gets to each region’s league championship tournament – he chokes. Nobody is more complicit in Ash’s annual big match choke-fests than his infuriatingly inconsistent captain and star Pokemon (the Joe Thornton of this analogy): Pikachu. But since the present battle between Pikachu and Tyrunt is happening comfortably before playoff time, the best Grant can hope for here is a momentary reprieve and a mini lesson-learning story arc before Ash eventually earns his badge anyway. Unfortunately for Grant, that will not be the case.

Tyrunt absorbs an Iron Tail from Pikachu and summons Meteor again. Pikachu laughs at this attempt to destroy the very planet itself, and calmly hops up the falling space rocks before batting one into Tyrunt’s mouth with its tail. Despite possessing jaws capable of crushing cars, Tyrunt – a Rock type Pokemon – is apparently not able to break rocks. 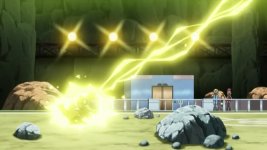 Immobilized by the meteor in its mouth, Tyrunt can only stand and watch as Pikachu unleashes its signature Thunderbolt attack for the win. Ash is ecstatic – he just won his second Kalos badge! He makes sure to thank Froakie, Fletchling, and Pikachu for a job well done – although only two of the three actually did anything.

Grant presents Ash with the Cliff Badge, making sure to work in another wall metaphor along the way. 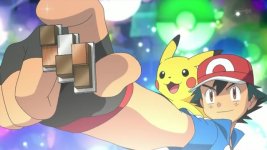 He asks Ash which French gym leader he plans on thrashing next, and like a typical girlfriend, Serena butts-in and informs Grant that Ash wants to go to Shalour City next, which just also happens to be home to the Tower of Mastery that she has always wanted to see (how convenient). Grant tells Ash that he looks forward to battling him again in the Battle Chateau, although Serena points out that Ash will have to defeat a lot of titled trainers first just to become noble enough to fight Grant there. But hey, whatever helps Grant sleep at night. He may have just lost a match to a mentally deficient ten-year-old who proved to be better at battling, but at least Grant gets to remain Ash’s social better; until Bastille Day that is. So until next time, au revoir Pokemon fans.