Wherein Ash and Serena go looking for the Titanic but Team Rocket beats them to it.

Welcome to a new feature on Garyland, where we review episodes of the anime that were banned for some reason or another. Some background on today's episode: An Undersea Place to Call Home/The Castle Beneath the Sea! Kuzumo and Dramidoro was originally supposed to air on April 24, 2014 in Japan and July 5 in the United States. This never came to pass, because earlier in April that year, a South Korean ferry ship sank due to the incompetence of the pilots and the overabundance of cargo and passengers. Several hundred people drowned – many of whom were high school students. The TokyoTV network wisely chose to cancel the airing of the episode because, of course, preteens are notorious for their knowledge of world news and current events and would have found this episode of Pokemon centering around exploring sunken ships in bad taste so soon after the Korean ferry boat tragedy. (The proceeding statement in Italics was dripping with sarcasm, for those of you who weren't aware...)

Seriously, even if the Japanese felt too closely connected with South Korea, what was to stop the dubbed episode from airing in the rest of the world? God forbid anything Pokemon-related ever debut in the U.S., excluding the admittedly terrible "Mastermind of Mirage Pokemon" special, and the obscure N64 title "Pokemon Puzzle League."

Anyway, at some point the Japanese decided that the requisite mourning period had ended, and it was safe to profit from the tragedy at last! So despite the episode being half a season old, it was treated like a brand new one with the 18th season theme song. The narrator did note that Ash is training for his upcoming gym battle against Grant – an unexpected concession to reality by the Pokemon Company. 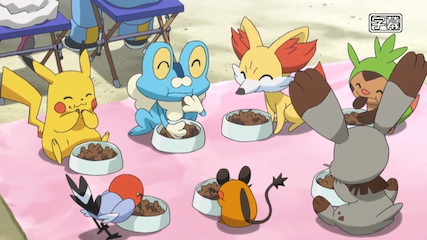 However, it would have been hard to hide the fact that Ash's Fletchinder is still a Fletchling, as well as that Hawlucha, Luxray, and Pancham are missing from the party. This is somewhat reminiscent of the period of time between the first and second broadcast seasons when the episodes were misaligned and Misty's Togepi and Jessie's Lickitung kept disappearing and reappearing from week to week – but not as jarring as the time that Ash's Charizard reverted to being a Charmander for two episodes.

So in any event, Ash does plan on spending the whole day training (which should already be a clue to veteran Poke-viewers that this episode is not headed anywhere particularly interesting) when Serena – Ash's latest wanna-be girlfriend – pipes up and says, "before that, why don't we have a little fun with this?"

It seems that Serena wants to introduce toys... This is definitely a new milestone in her and Ash's relationship. Although by the shocked faces of everyone else, I take it they aren't as experienced as Ash's honey-haired honey. Then again, I suppose this is the kind of thing that you sign up for when you start fooling around with a French girl like Serena.

As it turns out, Serena only plans on using the rod she got back at the Ambrette Aquarium to fish up some Water-type Pokemon (for now...), noting again how much she would like to have a Corsola. (You know who already has a Corsola? Ash's previous squeeze Misty...) Clemont rightly notes that if Ash was to add another water type to his bench, he would be that much more prepared to battle Grant's rock types. Unfortunately for our dim-witted hero, all he manages to fish up is a pissed-off Skrelp with a penchant for face-humping. 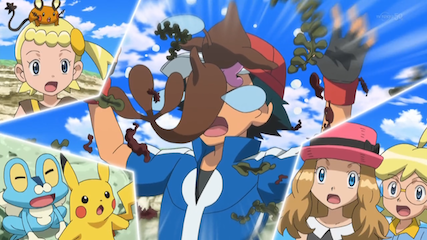 Bonnie notices that the Mock Kelp Pokemon is hurt and applies a non-brand-specific "bandage." (In order to differentiate it from all of the other Skrelp that will appear in this episode – yet another sign of a bad filler) Unfortunately, Horsea's drug-addled cousin does not appreciate Bonnie's kind turn and begins to Sludge Bomb everything in sight. Pikachu gets a full poisonous facial, and everyone evacuates the beach in search of a Pokemon Center.

Just then a van pulls up and a man rolls down the window. (Hop in kids, I've got candy!) Unfortunately, it's not James on the prowl for some hot young twinks but another man and his wife – 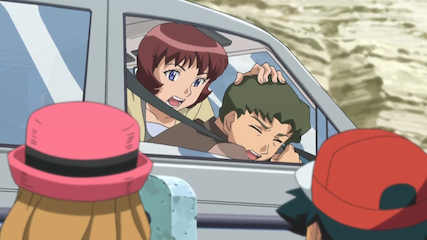 the latter of whom does not seem to approve of her husband's kidnappy behavior. As it turns out, Eddie and Lindsay are marine explorers – on the hunt for the sunken treasure of the Cussler, a ship that bears a strong resemblance to the RMS Titanic, including the fact that it struck an iceberg and sank. (An iceberg? In Japan/France? Sounds unlikely...) 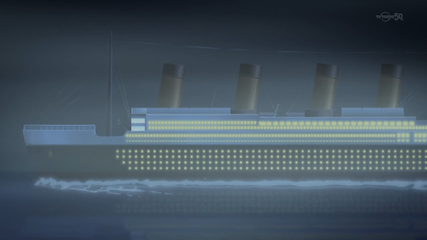 It seems highly probable that Serena will utter the phrase, "I'm flying Ash!" at some point in this episode...

Ed and Lindsay agree to take the kids with them on their potentially dangerous journey to search for the Cussler's sunken treasure at the whirlpool-infested intersection of three ocean currents, because why not? What could possibly go wrong?

Luckily Team Rocket are around as well, and all this talk of free booty has Jessie and James excited (for multiple reasons in the case of James). 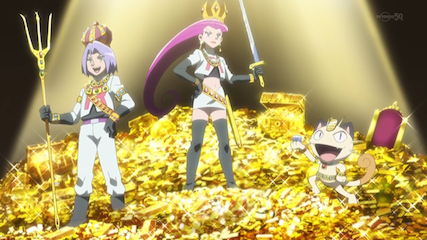 The placing of our voluptuous villains in their fantasy further solidifies Jessie's position as the insane leader of Team Rocket's Kalos division. (And if Jessie is the king, this makes James the queen – as is appropriate)

Eddie and Lindsay prepare to embark on their fantastic journey, but they unfortunately only have room for two children and an adult inside their submersible. (Who's design idea was that, Michael Jackson's?) Luckily, Clemont has an overly-complicated idea to decide which twerps get to go on a submarine ride, and his arcade game looking device declares that it will be the AmourShipping pair that will join Lindsay under the sea (someone cue up Sebastien the crab singing Kiss de Girl). To be fair, at least Ash does have some prior experience exploring the depths of the ocean with bizarre couples. 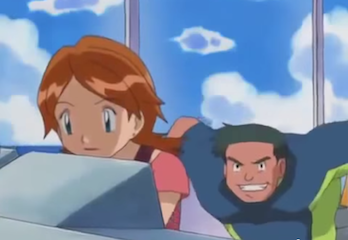 Ash, Serena, and Lindsay sink deeper and deeper into the darkened sea, and pass many more Skrelp along the way (including our friend from earlier with his distinctive bandage) and their evolved form, Dragalge. It appears that the local Water type Pokemon have constructed some sort of Undersea Place to Call Home (or a Castle Under the Sea, if you will) out of wreckage that has collected in this area – including the remains of the Cussler! However, a strange light catches the attention of all members of the expedition, both above and below the surface – there shouldn't be anyone else down here! 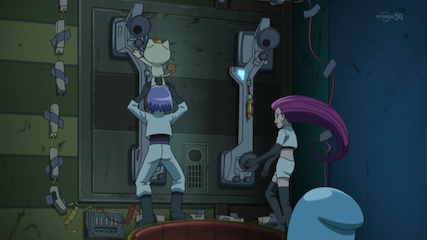 But as it turns out, Lindsay and Eddie have not led the first successful expedition to the Cussler's ruins – Team Rocket have beaten them to it!

The beautiful baddies have brought enough C-4 to break into Fort Knox, but not any scuba gear, because apparently there is still air inside of the decades – if not centuries – old Cussler shipwreck, and cutting a hole in the side of the hull did nothing to make the ship less airtight... I wouldn't be making such a big deal about the ridiculous (lack of) physics in this show, except that running out of air in a shipwreck played such a big part of the plot in "Pokemon Shipwreck."

But before Team Rocket can make their escape, they are accosted by Ash, Serena, Lindsay and the Skrelp/Dragalge. The Twerps are upset because Team Rocket plans on taking the treasure from the ship, and that's wrong because ... well, that's what they were planning on doing, darn it! 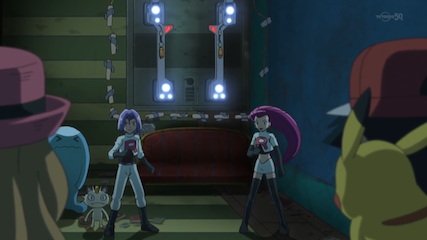 Also, cutting a hole in the shipwreck and flooding it with water is somehow bad for the Water-type Pokemon that live there? I don't know. They're really grasping with straws at this one.

Team Rocket does manage to blast the safe out of the ship and book it back to their Magikarp submarine, but before they can escape to safety with the loot, Ash's Froakie manages to put a wrench in the works with the help of the other Water Pokemon. 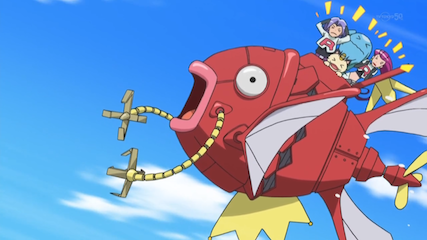 They surface amongst the whirlpools and are promptly sent blasting off again – right after losing the Cussler's vault.

But even with the villains vanquished, there is still the matter of Froakie and bandage-Skrelp escaping the whirlpools themselves. The Bubble Frog Pokemon recalls some primordial instinct (or programming) and hops across the flotsam and jetsam Frogger-style to the safety of Ash's arms.

[A word of advice from your friendly neighborhood Nintendo representative: do not play Frogger. You will catch AIDS and die. Next time you get the hankering for an arcade classic, try something wholesome like Donkey Kong – available for download on the Nintendo eShop!] So with that, Ash has his strategy for fighting Grant, and another episode of Pokemon is over.

Final thoughts: Well, unlike some other banned episodes, like the Team Rocket/Plasma special, or the time that Ash caught 30 Tauros, there was nothing too important to see here. I liked the different art style that was used for Eddie and Lindsay ... and that was about it. The tiny plot hole of where Ash got his Tyrunt-beating strategy was closed, but that hardly made up for the other twenty one minutes of the episode. The verdict: this episode was probably better off skipped.