XY023 Coming Back into the Cold:

1723 Coming Back into the Cold

Wherein the gang goes to a museum.

As today's episode begins, Ash and his friends are still making their slow way towards Cyllage City and Ash's next gym battle. Ash is busy pushing his Froakie and Fletchling to the limit in training, having apparently decided not to use his level one-billion Pikachu against Grant the rock master (why not? Pikachu was good enough to beat Brock, as I recall). But alas, Pokemon fans, today's episode is not destined to be particularly memorable. Ash and friends are currently on the museum tour of Kalos (giving Ash the true semester abroad experience); last week it was an aquarium and this week...well let's find out, shall we? 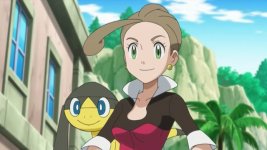 The first character of the day the gang meets isn't actually a character of the day at all, it's Alexa! Yes, everybody's favorite reporter has returned with her weird cleavage-less uni-boob. I was originally under the impression that this was the product of the American censors, but the image above implies that Alexa is now cleavage-less world wide. I usually wouldn't make such a big fuss, but why even give her a low-cut shirt in the first place if boobs are now banned in the anime? Is this a case of the game designers having different constraints than the anime producers? Because once upon a time, the anime would take run-of-the-mill video game characters and make them waaay more fan-servicy. Case in point: 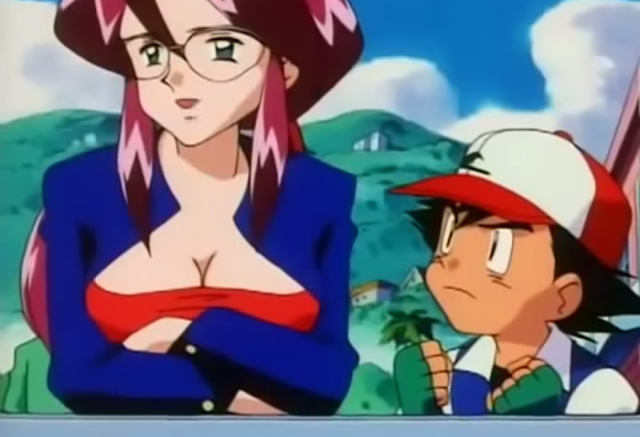 But anyway, it is probably just a sign of how bland today's episode is that I've already wasted an entire paragraph and a half discussing the size and shape of Alexa's breasts. Back in the show, Alexa is explaining to Ash and friends that she is here on assignment researching an article about a new discovery at the local museum. This is all mildly interesting to everyone, except for Serena that is. 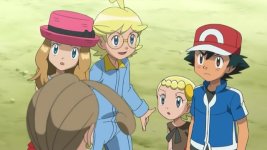 Judging by her blank face, Serena is currently plotting how she will kill Alexa, dissolve her body in Tentacruel acid, and then dump the remains in the Seine. This is probably due to the fact that Alexa is a girl who knows Ash (and dresses like a whore!), thus making her an unacceptable rival in Serena's quest to make AmourShipping a reality (although if Serena really is jealous of Alexa, she would have absolutely hated Prima/Lorelei).

Because Serena's mind was otherwise occupied when Alexa explained the allure of the museum, she needs a refresher on why exactly the gang should go there. 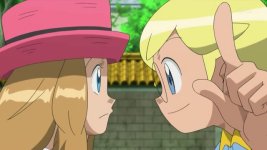 Luckily Clemont has the answer: fossils! "Fossils are filled with fun!" he declares, "Not to mention science!" Oh Clemont, you sure know how to get the ladies excited don't you? At this rate, Bonnie will never be able to offload him on to some unsuspecting woman, because her big brother has firmly established himself as the new Brockly virgin of the group.

Everybody heads over to the natural history museum with Alexa in the lead. Meanwhile, Team Rocket is watching from the bushes and rather than shelling out the ten bucks it would cost for tickets, James sends in a camera drone after the twerps. 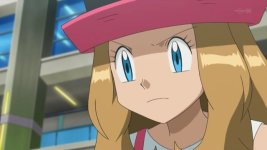 Ash, Clemont, and Bonnie take some time to gaze at the various bones and fossils, but Serena still doesn't understand what the big deal is about all these rocks (there is only one kind of rock she is interested in, and she wants Ash to give it to her mounted on a ring).

Alexa takes this opportunity to point out that they haven't yet seen the big discovery that brought her to the museum in the first place. So everybody follows the head scientist to a climate controlled room where they are required to put on giant puffy orange coats. Dumb-Ash makes the profound observation that the cold-weather room is cold, and follows this up with a bit of old-fashioned physical comedy. 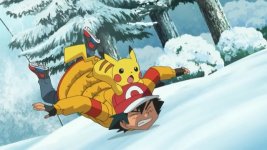 The big discovery the scientist mentioned turns out to be a resurrected Amaura and Aurorus (pssh, Pokemon fossil resurrection? That is sooo 1998).

Everybody plays with the snow dinosaurs for a bit, but then hypothermia begins to set in (dumb-Ash declares that he doesn't feel cold at all), and the group retreats to the warmth of the museum. This allows James to blast a giant hole in the door (which apparently wasn't heard or noticed by museum security). Jessie and James coax Amaura into the back of their truck by promising to play (and positively prancing, something James does quite well), but neither Meowth nor James has much luck convincing Aurorus to follow, so Team Rocket decides to quit while they're ahead for once, and takes off with just Amaura.

The scientific team finally shows up just as the Rocket truck is pulling away, and it is at this point that mama Aurorus belatedly realizes that its child is being taken away. The scientist explains to the twerps the trouble that Amaura is in because it has to stay in a cold environment at all times (no wonder the thing went extinct), which raises some important questions. First, about the ethicality of bringing this temperamental species back from extinction to an increasingly warming world, but more importantly – how does this rule work in the games? Does Amaura/Aurorus automatically faint if you use it in the desert? Are Pokeballs climate controlled? What about Bill's PC?

The twerps, with Alexa in tow, manage to track down the Rocket truck (with no help from Officer Jenny and the police, I see) due to some cheesy plot device where Amaura is able to create auroras that follow it around like Jesus and his magic star. 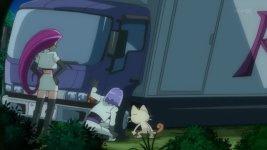 At the edge of a clearing, they spot a truck with a big red 'R' painted on the side being repaired by a red-haired lady, a blue-haired man, and a Meowth. Dumb-Ash (who is usually quicker to finger Team Rocket for potential misdeeds than Freddie is to blame Red Herring on A Pup Named Scooby Doo), takes this all in and declares, "Who are you?!" 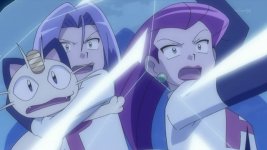 The artistes of Team Rocket don't usually need audience prompting to break into their motto, but it sure doesn't hurt either. In the ensuing battle, Chespin rocks Inkay but Meowth gets a rare start and is actually beating Fennekin before Aurorus unfairly tags-in and freezes him. Wobbuffet manages to stave off Pikachu's electricity before Aurorus steps in again and puts the rest of Team Rocket in a deep freeze. The scientists pull up in a good-guy truck (this one doesn't have an 'R' painted on the side) and returns Amaura and Aurorus to their forced captivity. Another win for the heroes!