Wherein Ash takes a field trip to the aquarium.

Today's episode begins with...the theme song! The show hasn't done that in a while. Perhaps this is a sign that this particular episode of Pokemon is going to be jam-packed with action and adventure, with no time to spare for a cold opening? I can only imagine what kind of fantastic new sight is about to be revealed! The tension only increases as the episode begins with our heroes rushing towards some exotic new locale. What could it be? What could be so exciting, so positively amazing, that the animators couldn't waste a single frame on a teaser segment? 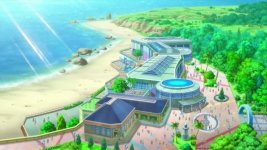 ...it's the ocean. Something Ash sees in like every third episode, hell every episode during the Orange Islands arc. Yet here we are, so we might as well make the best of it. But it looks like the animators decided against doing a Kalos remake of Holiday at Aopulco, not even giving in to the temptation of putting Serena in a skimpy swimsuit (perhaps they blew their sleaze budget on the last episode).

So rather than spending the episode allowing their underage bodies to be objectified by creepy men living in their mother's basements (again, y'all can just re-watch last week's episode), our heroes decide to take a holiday from being homeless dregs on society and go to see a Pokemon aquarium.

Ash and company arrive at the aquarium (failing to notice the irony between them paying to see Pokemon in unwilling captivity and the many times they have thwarted Team Rocket's attempts to profit from Pokemon by putting them in captivity), and Bonnie promptly proposes for Clemont to the lady at the ticket counter 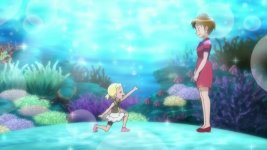 (didn't she bring the video personal ad she made?), before being pulled away by Clemont's mechanical Aipom arm – once again failing in her attempts to secure him an honorable wife.

The group tours the aquarium, viewing water Pokemon from all of the various regions (with a little too much Johto for my tastes – the flashbacks, oh the flashbacks, I was there man). 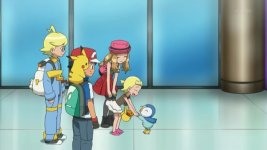 They even come across a group of Piplup, which makes Ash remember that he knew a Piplup once that was "something else," neglecting to mention that he knew its trainer too (Ash never forgets a Pokemon, pretty girls – not so much).

Eventually a bearded old man takes an odd interest in our heroes (probably good that they aren't in swim attire then...) and tells them a story about a legendary golden Magikarp. This local icon has its own statue at the aquarium, which soon attracts the attention of an undercover Team Rocket 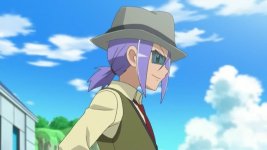 (somehow James manages to look even more gay when he's not cross-dressing) – with Meowth looking like the love-child of Simon and Garfunkel – and they discuss whether or not the statue itself is made of solid gold, and thus worth stealing. 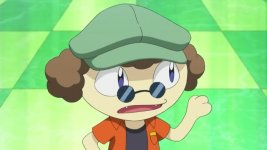 As for the twerps, they have made their way down to the beach where the museum curator is fishing for more unwilling additions to the aquarium's tanks. He introduces his partner – a pissed-off Clauncher – and Dexter describes it as the Water-Gun Pokemon. This rubs me the wrong way for several reasons. First, there will only ever be one true angry crustacean Pokemon in my heart, and second, how can you describe Clauncher as the "Water Gun" Pokemon, with a wimpy water-cannon for an arm, when there is already a water Pokemon sporting two giant anti-aircraft artillery pieces on its back (also, what's up with the Japanese obsession with gun-arms)? [End Genwunner rant] 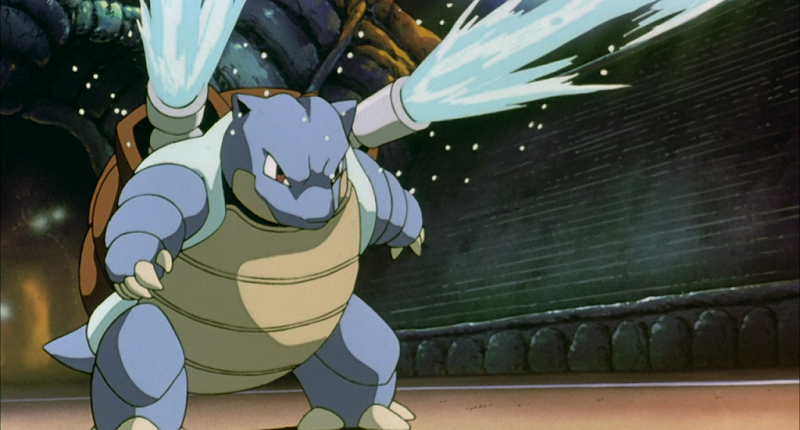 Anyway, the aquarium director tells everyone (including Team Rocket listening from their classic Magikarp submarine) about the mysterious golden Magikarp, which once saved a diver from a wild Starmie that somehow managed to acquire both TM24 and the desire to shock the crap out of random passers-by. This inspires both the twerps and Team Rocket to declare that today they will catch the Golden Magikarp themselves – despite the fact that the aquarium curator has apparently been trying to do just that every single day for quite some time (this actually does have some precedent, plus our hero also has an Ash-hole like tendency to show up and defeat characters-of-the-day at competitions they have been training their whole lives to win – like Pokemon racing, or Pokemon sumo wrestling, or flying-type full-combat horseshoes). 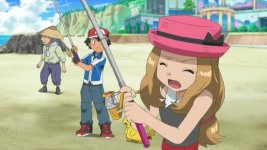 Everyone gets to fishing, but apparently Serena is not used to handling a pole (something she might want to bone up on (haha) before trying to get serious with Ash).

Serena then tries to impress Ash by capturing a Corsola she hooked (while subliminally reminding him of Whatshername, that angry red-haired girl that used to follow him around), but unfortunately for her she fails miserably when Fennekin declines to do battle with a water-type (leading to a wet t-shirt moment that probably did less to attract Ash's attention than capturing a Pokemon would have).

Meanwhile, Team Rocket have painted their Magikarp sub gold in an attempt to attract its mate, and Clemont has once again turned to science to try and solve a problem – this time he has developed a Chinchou sonar device to attract Magikarp in a less overtly sexual way than Team Rocket. Clemont and his satanic science fails as usual (another win for the Medieval church!), but he does succeed at attracting a horde of angry Sharpedo. 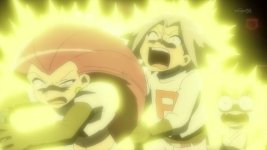 For their part, Team Rocket have apparently discovered the same evil genius Starmie from the legend, and experience first-hand the electrical power of its Thunderbolt.

However, Clemont is undeterred by his temporary setback. The John Denver look-a-like exclaims that in the five minutes or so since the Sharpedo attack, "I just ran extensive tests on the Magikarp," and discovered some complicated sciency thing that he missed last time, but no matter! Now he has an upgraded Lanturn-looking Magikarp attracting device! This causes dumb-Ash to remark, "It's amazing that science is so amazing!"

With science now on their side, the twerps cast their lines again and manage to snag a golden Magikarp alright (but unbeknownst to them it is actually Team Rocket's submarine). Ash issues the best line of the day, while firmly grasping his rod, "It's too big for me to hold on to!" (which undoubtedly caused Serena to nearly faint with excitement/fright). 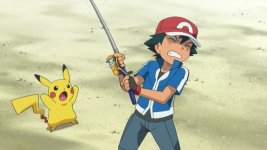 It soon becomes apparent to everyone that the golden Magikarp in question is not the stuff of legends, but Team Rocket's recently pimped-out ride. After their traditional introductory motto, Team Rocket goes to work trying to capture Clauncher, and then Dedenne when that proves too difficult. But of course, the douchebag lobster Pokemon has to show that it is not such a bad guy by saving Dedenne, which provides Ash with the perfect opportunity to order Pikachu to add yet another attempted murder charge to his growing rap sheet (which Officer Jenny is undoubtedly too lazy to do anything about) by blasting Team Rocket off again. 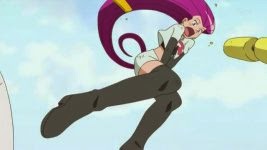 Jessie uses this opportunity to give us a great parting shot of her grabbing at her crotch (she must have heard Ash talking about his too-big-to-handle pole), while James refuses to allow Wobbuffet to get the customary last word by shouting Wobbuffet! himself (which caused me to laugh unnecessarily loudly). 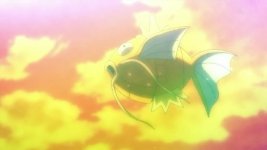 With Team Rocket gone, everyone looks up to see a leaping Magikarp glimmering golden in the sunset. This was probably caused by the change in the lighting more than the Magikarp actually being gold, but that explanation is far too scientific for everyone's tastes. Besides, this has convinced the old aquarium curator that he should spend the rest of his rapidly decreasing years chasing after the elusive (and probably nonexistent) fish. And isn't filling people with unrealistic false hopes what faith is all about? Screw you science!