XY021 A PokéVision of Things to Come:

1721 A PokéVision of Things to Come 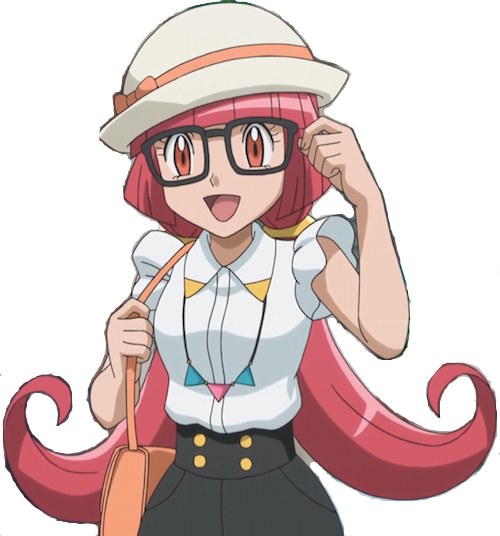 Today's episode is.....very Japanese. I mean, clearly every episode is Japanese in that it the show originates from the Land of the Rising Sun, but the overwhelming Asian-ness of the anime has markedly decreased since the days of Kanto. Even after 4Kids departed the franchise and took their irrational fear of rice balls with them, the animators continued a policy of self-censorship when it came to creating new episodes that largely managed to effectively hide the show's metaphorical Asian thunder. 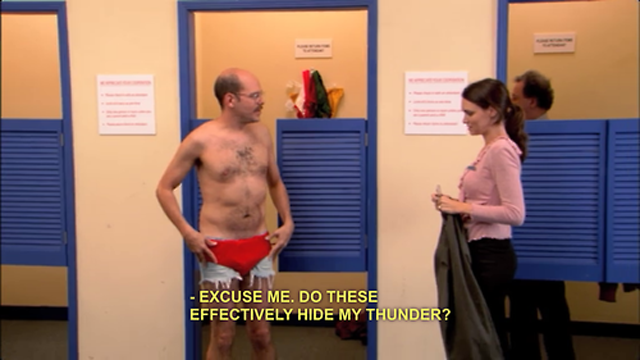 But every once in awhile an episode like this one makes it across the Pacific and we are reminded from whence the anime originates.

This episode begins with our heroes still on their way to Cyllage City. Once again they have decided to seek refuge in one of the many money pits of the insolvent Pokemon welfare state – the Pokemon Center: a place where elementary school dropouts can eat and sleep for free on the public dime, all while continuing to contribute nothing to society. This particular Pokemon Center has another amenity to offer – the Pokevision video service. 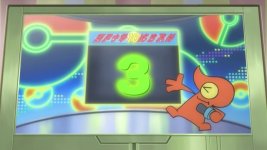 The Pokevision phenomenon seems to be exclusive to Kalos, so it falls to the French members of Ash's entourage to explain it to him (and us, as well). Apparently all the cool kids these days are creating weird hybrid home videos/personal ads in the hopes of making it on the Pokevision top video countdown show (and a chance to meet Ryan Seacrest). In typical dumb-Ash fashion, our hero takes in all the information his friends are giving him, realizes there is no more storage space in his tiny, tiny head, and outputs, "I wish I knew what that meant."

Then, in a move that can only have been motivated by the desire of the animators to remind us they are all socially awkward sexually repressed Japanese men, the star of the top Pokevision video is revealed: 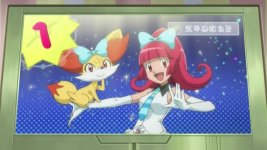 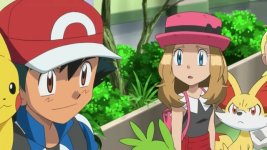 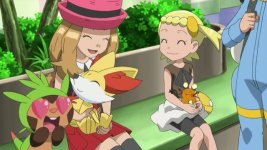 Serena apparently misread the whole "Ash likes Pokemon" moral of the last scene as "Ash likes girls who make Pokevision videos" (it's actually Ash's father who likes girls that make him videos), and resolves that she too will become a Pokevision star. 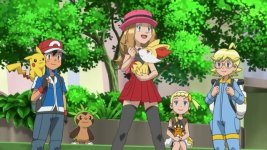 She asks her boyfriend/stalkee if he would help her in the filming of her video. Ash is still too emotionally immature to know what she means and declines because he needs to train for his next gym battle, dammit woman! 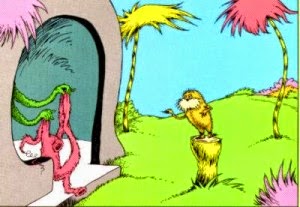 As we all know, a gym badge – much like a thneed – is a fine-something-that-all-people need. Good of Ash to keep his priorities straight like that, I only wish he had the same focus of mind back during the endless death march through Johto.

With Ash out of the picture, the rest of the group make their way over to the other end of the Pokemon Center, which is home to the creepy Pokevision voyeur/camera equipment renter. 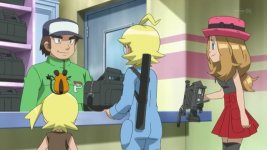 It's a shame that Ash left Tracey back in Pallet Town, he has plenty of experience in holding a videocamera, although he would definitely want to wipe the tapes of Oak and Delia's late-night deviant exploits before he reused them to film Serena's video. Bonnie too, decides that she would like to film a video with her Dedenne, until Clemont gets all possessive and points out that Dedenne actually belongs to him. Unfazed, Bonnie concludes she will just have to film a personal ad for her brother to find him a wife, so she can finally stop taking care of him.

Out on location, Bonnie's foray into directing does not go as planned. Clemont proves to be about as good at acting as he is at inventing things that don't explode and/or become self-aware and kick him out of his own gym (i.e. he is not good at all). 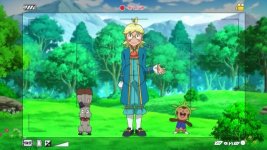 Bonnie even goes as far as to voice all of his lines for him, but this just results in Clemont taking on a weird marionette appearance (perhaps he thought he was auditioning for the part of Scarecrow in the Wizard of Oz?) 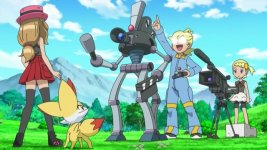 But Clemont soon tires of this and decides to create some kind of giant animatronic camera/molester robot in order to "help" Serena film her video (he better hope the cameramen union doesn't hear about this, or Todd Snap will come over to Kalos and beat Clemont black and blue). However, like most of Clemont's inventions, the device soon becomes evilly self-aware and proceeds to chase Serena and Fennekin in a mad rampage across the French countryside. 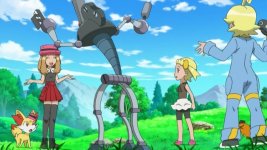 Ash witnesses all this from his training spot high on a hill, and initially (and stupidly) assumes that everyone is enjoying another one of Clemont's inventions, issuing one of his typical simpleton "isn't science amazing" remarks. But belatedly, the hamster inside Ash's head begins slowly turning his wheel, causing the gears to grind, and allowing Ash to access the memory file that reads, literally every single one of Clemont's inventions try to kill everyone. 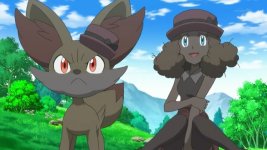 And so Ash decides to intervene the only way he knows how – by having Pikachu blast the crap out of everyone with 100,000 volts of electricity. But although Ash's action saves Serena and Fennekin from robot molestation, the resulting soot and frizzy hair from the explosion serve to seriously piss off the prima-donna Fennekin. Serena realizes her chance has arrived now that Ash is momentarily distracted from his training. If only she can think of something that would entice her would-be-lover to help make her video... 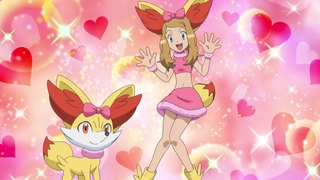 Just when I thought the episode couldn't get any more Japanese, the animators decide to have Serena dabble in the furry/cosplay subculture. And while this was mostly done as a fanservice to the (probably not unsubstantial) lecherous adult segment of the viewing population, I have to admit, I kind of understand her reasoning. 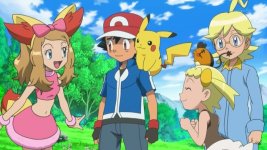 After all, Ash clearly isn't attracted to the typical parts of the female anatomy, but slap on a tail and some Fennekin ears and we've got ourselves a whole new ballgame. Ash seems understandably confused by this whole turn of events (when isn't he?), but nevertheless Serena convinces him to put his training on hold and help her to make her video.

Having temporarily gained Ash's limited attention and recruited him into her film crew, Serena quickly undergoes a costume change to try to show how domestic she can be and to prove to Ash that she is totally wife-able material, to borrow a phrase from my friend. 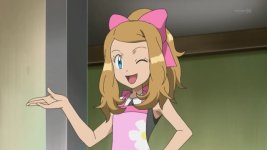 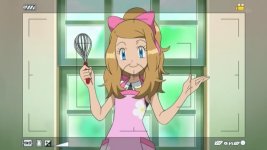 Unfortunately it seems that she has roped Pikachu into this too, poor little guy (or maybe he's going full-wingman to help get Ash laid?), but in throw-back to his physical comedy days, Pikachu spills baking powder all over the increasingly vain Fennekin. 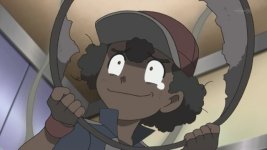 As a result, Fennekin's Ember provides us with the second Ash-fro of the episode.

As the filming moves back outside, it seems that somebody has been secretly watching Serena film her Pokevision video with great interest from a dark alley. No, it isn't a voyeur with child-predation on the brain, it's Team Rocket (thank god)! Nothing could be more offensive to the minds of under-appreciated bohemian artist types like Jessie and James than the thought that the pedestrian twerps are trying to create. So Team Rocket does what any other sensible person would do in the same situation – they invent their own film studio (complete with Meowth in the role of the MGM lion). 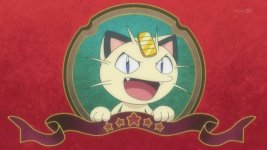 Jessie, James, and Meowth approach the twerps under the guise of being a beautiful actress, a flamboyant studio executive, and respected director Steven Meowthberg, respectively, and offer to help produce the Pokevision videos. 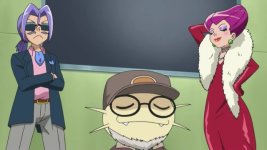 They take Pikachu, Dedenne, and Fennekin, claiming they need to completely reshoot the movie to give it more artistic integrity, and then they retreat into a back room, which makes the twerps suspicious. When Ash and company follow they find the room is empty except for a rapidly ascending Meowth-shaped hot air balloon, which is an incredible coincidence because Team Rocket also has a hot air balloon and 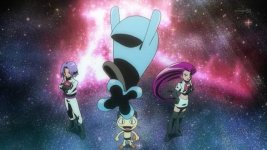 WAIT JUST ONE SECOND – the vain red-haired actress, the obviously gay blue-haired studio executive, and the talking Meowth with a beard WERE ACTUALLY TEAM ROCKET ALL ALONG! The villainous trio successfully make their escape, finally succeeding at stealing a small mouse from a mentally-challenged boy, and after only sixteen short years of trying! But true to form, instead of say, making straight for Team Rocket headquarters, our villains make a quick pit stop to prematurely drink the water of success (Wobbuffet requiring a whole bucket).

Unfortunately for Team Rocket, Jessie's artistic vanity gets the best of her and she decides to get back into costume and threatens James, Meowth, and Wobbuffet with physical violence unless they help film her own Pokevision video. The twerps' Pokemon take this opportunity to bust their way out of their cage, while the twerps themselves arrive on the scene thanks to this generation's Ash's-flying-type-bitch – Fletchling. But, oh no, there is something preventing Fennekin from making its escape – a big ol' puddle of mud – and unfortunately Serena lacks some kind of magical physics-bending laser-guided ball-shaped item to recall the wussy Fennekin from its present location across the mud puddle. What to do? 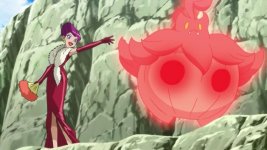 Meanwhile, Team Rocket have sprung into action, sending Pumpkaboo and Inkay out to do battle with the twerps. But thanks to a classic Pokemon overly-sentimental flashback scene, Fennekin overcomes the adversity of mud, walks across the puddle while (gasp!) dirtying its paws, and then proceeds to deep-fry Pumpkaboo with a wicked Flamethrower. Ash refuses to be left off the gratuitous violence bandwagon, 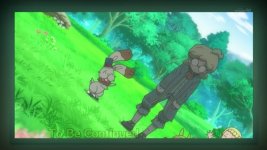 and sends Team Rocket blasting off again with a vicious Thunderbolt attack.

Having once again potentially sent Team Rocket off to their violent deaths, Ash sits down with the rest of the group to take in Serena's film – in all its creepy Japanese schoolgirl glory. But fortunately the episode doesn't end there, but instead with the screening of Bonnie's personal ad for her brother. Unfortunately, Clemont makes a real mess of it, leaving Bonnie to wonder when she will ever find a reliable woman to take this off her hands.