Garyland: Mr. Gary to You
Show Some Respect!

When I was in college, people would often refer to our campus as “Garyland” in deference to the men’s basketball coach who routinely inspired our collection of mediocre and forgettable players to perform slightly above expectations.

It seems to me that there is only one Gary deserving of having something named after him; someone who had his own chauffeured convertible, a coterie of older female admirers, and the financial capability to make million-dollar bets with his world-famous grandfather; all at the age of ten. 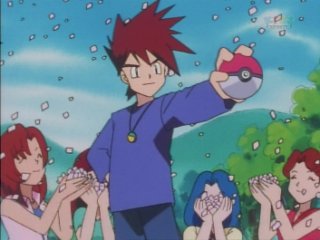 His name is Gary Motherf***ing Oak.

I named this site Garyland to honor the greatest Pokémon trainer of all time (and also “Oakland” is apparently taken). Other sites have lame Pokémon mascots – Garyland is the only website worth mentioning with Gary Oak himself gracing the masthead.

Gary is simply the very best; like no one ever was. The man is like the Jesus or the Chuck Norris of the Pokémon world – through him all things are possible. There are eight gyms in Kanto; Gary got ten badges. The website Know Your Meme described Gary thusly:

"You have just been rewarded with your Masters Degree in Cancer Research. In ten minutes you are going to have an interview to get the job of a lifetime with a six digit salary. You’ll be able to pay off your student loans no problem. You flip on the TV right before you leave and what do you see? GARY MOTHERFUCKING OAK has just found the cure for cancer."

With all the modesty and unpretentiousness of a young rapper, Gary stomped around Kanto letting everyone and anyone know that he was the greatest trainer from Pallet Town – always remaining a step or two (or three…or four) ahead of his rival and possible uncle Ash Ketchum.

If you needed any more evidence of Gary’s awesomeness – when the Pokémon Company decided to give the axe to all the original anime voice actors, they simply couldn’t bring themselves to replace Gary. As a matter of fact, they decided more characters should sound like Gary, and lo now Professor Oak, James, and even Meowth are voiced by Gary too. So although Gary’s outlandish bravado has cooled over time, he remains the paragon of coolness in the Pokémon world; just now more in the mold of the confident old bluesman rather than the brash rapper he once was.

And judging from the available evidence, students at the University of Garyland know which Gary they prefer too. (The answer is the Pokémon one if you were too lazy to click the hyperlink)

Long may he reign.