On the Subject of Shipping

One cannot move very deep into waters of the Pokémon fandom without discovering the somewhat-disturbing concept of shipping. To those who remain (blissfully) unaware, shipping refers to the process of fans grouping pairs of characters into romantic relationships based on (generally flimsy) evidence. Those who agree with a given pairing of characters will say they “support” their particular ship. Similar to the Internet’s Rule 34 – if two characters exist within the Pokémon universe, you can be sure someone somewhere has shipped them. 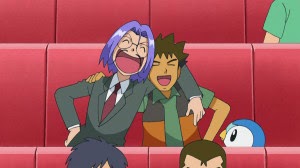 I could spend some time ranting and raving about the inherent creepiness of imagining video game characters or cartoon pre-teens involved in romantic entanglements.

What follows is a list of the ships that I feel strongly about, which should hopefully provide some context for my opinionated ramblings in the anime episode guides.

PokéShipping (aka AAML) – Ash and Misty:

The granddaddy of all ships, this one has it all: action, jealousy, globetrotting, and the almost total obliviousness of one of the principal parties. Stop me if you’ve heard this one before – boy meets girl, boy steals girl’s bike to escape a murderous flock of birds, boy’s pet electric rat destroys girl’s bike, girl uses bike as a convenient excuse to follow boy around the world for years until girl’s bike is repaired, at which point boy discards girl whilst remaining blissfully ignorant of girl’s obvious attraction to boy. Shakespeare himself couldn’t have written a better romance! 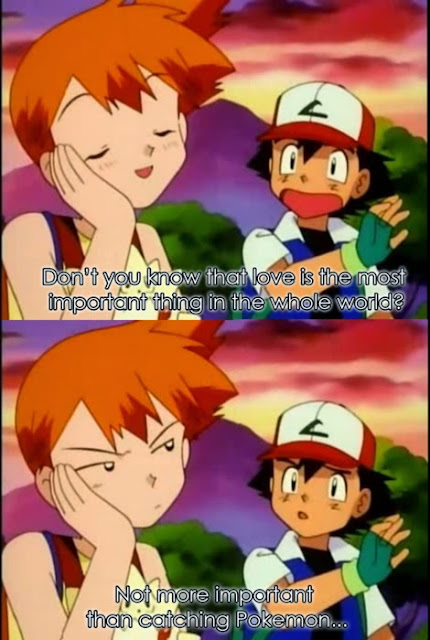 Just in case my sarcasm wasn’t readily apparent I should make clear that I don’t believe Ash and Misty are madly in love and destined to be “2getha 4eva.” For starters, and I mean this in the nicest way possible, Ash is an idiot. His entire life as we know it has consisted of dropping out of school at age 10 to freeload around the world engaging in cockfights with magical animals he manages to enslave along the way. 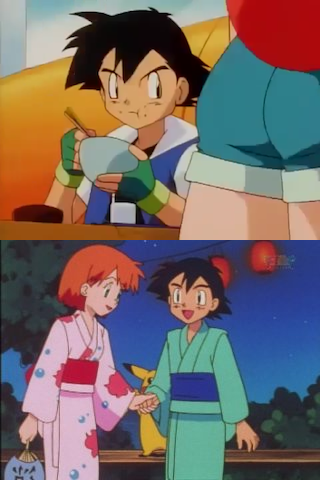 And even in a universe where this is considered normal behavior, Ash has a particular single-minded passion for cockfighting that borders on an obsession. There is no room in his tiny, tiny brain for anything that doesn’t relate to his next Pokémon battle or satisfying his biological need to stuff his face with free food – and certainly no time to consider the charms of the fairer sex.

Poor Misty, bless her heart, has a rather obvious attraction to the show’s protagonist, but all of her efforts are ultimately in vain. And yet, Ash displays stronger feelings for Misty than he has for any of his other travel companions (sorry Brock!), which basically undermines every other Ash + anyone ships, but even sixteen years into the show he still seems too immature to act on these latent feelings. Perhaps someday Ash’s arrested physical development will end and his Oak genes will kick in (more on that below), causing him to augment his obsession with Pokémon with an obsession with pussy. But until that day comes, Ash remains oblivious as ever.

Delia Ketchum is the Cartman’s Mom of Pallet Town – i.e. she is a dirty slut with a son who’s paternity is the subject of mass speculation. I even think she sounds a bit like Ms. Cartman, and she shares her South Park counterpart’s lack of awareness/concern with what her son is getting up to. Delia sends her imbecile offspring out into the world with little more than a pair of rubber gloves and a (probably necessary) reminder to change his underwear daily.

For his part, Ash shows little concern for the identity of his missing father. After all, he barely shows concern for the mother he does know about. All these years (months? weeks? It’s hard to tell since apparently Ash has been ten for the past 16 years) on the road and Ash hardly ever bothers to call his mother, and he barely stops in Pallet Town long enough to change his clothes before he departs on his next adventure. Yet he frequently takes time out of his journey to call or visit with another resident of Pallet, the eccentric professor from down the road. 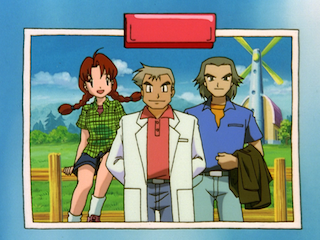 that Delia has been a close friend and student of the professor since she was still in pigtails, and every time we see either Oak or Delia in the anime the other is never too far behind. I don’t think it is too much of a stretch to imagine the two as a couple. In fact, it seems pretty obvious to everyone except Ash that his mom and the good professor have been studying human anatomy together – probably for at least the ten years Ash has been alive, judging by the aforementioned photograph. 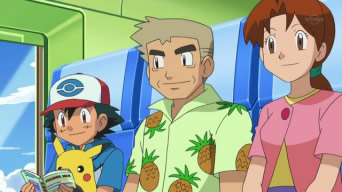 Does that make Professor Oak Ash’s father? I certainly think so. It helps explain so many other things in the show: the fact that Professor Oak has taken a weirdly personal interest in Ash’s Pokémon journey (even entrusting Ash with carrying around the super-top-secret-very-important-plot-device G.S. Ball), the fact that Delia and Oak are literally always hanging out together and sharing fun outings like visiting a bathing suit beauty contest in Porta Vista 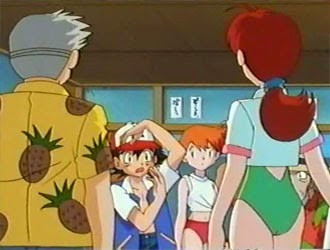 or taking a couple’s vacation to the Unova region, the fact that Ash had a weirdly personal (almost homoerotic (DaddyShipping!)) connection to little Sammy Oak in Movie 4, 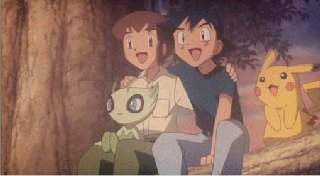 and the fact that Gary Oak harbors an inexplicable hatred for his incompetent and cheerleader-less neighbor. I mean, what explains that last point better than Gary needing to defend the family name from his scandal-causing bastard uncle? Why else is Gary so driven to outshine Ash, who is so clearly his inferior in every way (especially since the two apparently met for the first time in the pilot episode (retcon backstories be damned!))

But if Gary knows Ash is his uncle why hasn’t Ash figured it out? If you need this question answered then you must be a bigger dumb-ash than the show’s protagonist.

I really don’t know how else to put this. James of Team Rocket is attracted to other men.

Allegations that James and Jessie are, or are meant to be, in some kind of romantic relationship are baseless and insulting to James, the LGBT community, and drag queens everywhere. Why can’t Pokémon fans accept James for who he is? It’s bad enough that his parents don’t recognize his sexual orientation and want to force him to marry Jessebelle (basically Jessie with a Southern accent), but he also must deal with legions of shippers with outdated notions of sexual norms.

I’ll save the overwhelming evidence of James’ fabulousness for another post. For now, I will simply allow James to express his opinion of RocketShipping for himself:

That’s right. He would literally rather die.

Those are about the only anime ships that I really care about, but there are some other ships that I find interesting:

The silent nature of the various video game protagonists precludes me from making any real insightful judgments about shipping evidence within the games. Most of the background information we learn about the characters comes from the anime or the manga. That being said, I firmly support the shipping of Red and Daisy Oak. 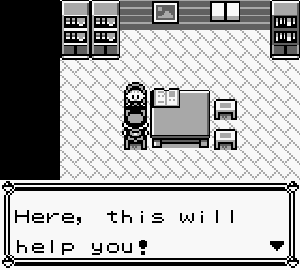 I can’t seem to find a name for this particular ship (perhaps even the Internet realizes the inherent absurdity of playing matchmaker with video game characters). But c’mon, there is totally a reason she gives you that Town Map… perhaps she is expecting some kind of service will be provided in-kind? (Hehe…service…) At any rate, this would also explain why Blue is such an ass in the original games. So to recap, I’m totally in favor of Red and Daisy (Raisy? Dred?) (Clearly the later) ***Edit*** Upon further examination, it appears that TownMapShipping is the correct name for this pairing. I feel like this just corroborates my position

I haven't read many of the manga, mostly just the early Pokemon Adventures and EToP, but I know they're home to some pretty weird stuff, especially in Japan... 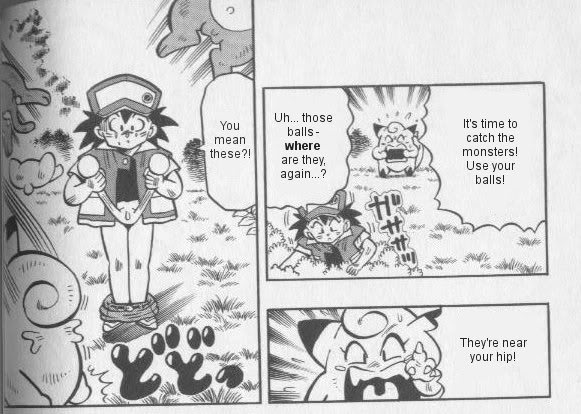 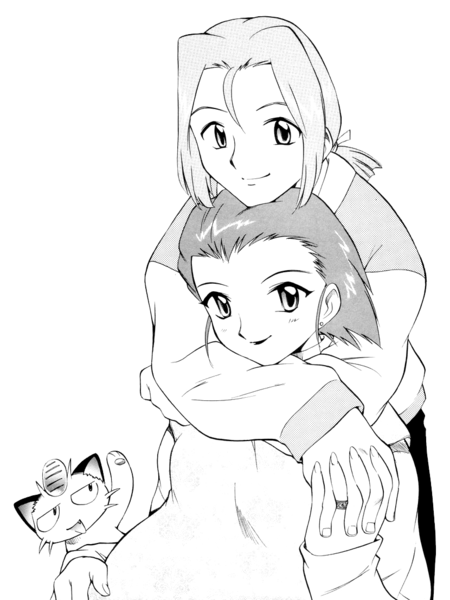 Strangest of all, the Electric Tale of Pikachu, a manga supposedly based on the anime (except not really – and everyone has ginormous boobs), ends with Jessie and James getting married and procreating.

According to RocketShippers, this is definitive canon proof that anime Jessie and anime James are in love and meant to live together in heterosexual bliss.
I could spend some time pointing out that the anime, the manga, and the video games are separate entities, even if they are based on one another to some extent. But instead, I'm going to let Lucille Bluth express my feelings about the RocketShipping "evidence" in the EToP epilogue for me: