Welcome to Garyland: a Pokémon Fansite for Adults

Adults you say? But Pokémon is for children!

Balderdash! Nintendo may market the franchise at kids, but there are plenty of innuendos, double entendres, and hidden messages for the discerning eye to discover.

Sorry, nothing like that here. Garyland is “adult” only in terms of its author’s mindset when consuming and discussing Pokémon; not in the actual content of the website. You can expect to see some salty language, historical and literary allusions, and plenty of innuendos and adult humor about the soap opera-esque nature of the anime, but nothing that could be classified as “mature content.” That being said, this is probably NOT a website I would recommend for children under thirteen, or anyone else who can not appreciate tongue-in-cheek humor and sarcasm. As with anything else on the Internet, use your own discretion before viewing.

What can you find on Garyland?

This site is a repository for my own opinionated ramblings about all things Pokémon. Predominantly I recap and review the never-ending soap opera that is the Pokémon anime, but I occasionally diversify the site’s contents with items relating to all aspects of the franchise: the video games, the manga, the trading cards, etc.

Isn’t this the same as Pokemopolis?

Not really. There is certainly some overlap in the mission of my site and the unfortunately-extinct purveyors of Pokémon “dodginess.” I share their view of James’ sexual orientation, their belief in the undercurrent of adult humor running through this “children’s” show, and many other things besides (Ash’s status as an idiot savant of Pokémon battling, Professor Oak’s long-standing affair with Delia Ketchum, etc.) However, the opinions that I bring to Garyland are my own, even if they are occasionally shared by others.

Why do you insist on referring to Satoshi, Kasumi, Takeshi, Dr. Okido, etc. by their slave names?

Full disclosure: I am an American – I always have been, and I probably always will be. I don’t speak Japanese and I therefore have always consumed the English translations of the various Pokémon products. I don’t begrudge those purists within the Pokémon community who insist that only the original Japanese versions are worth their time, but I ask that they similarly respect my decision to stick with the English editions that I love and understand. Because quite frankly I don’t care if in the original Japanese versions Musashi and Kojiro routinely declare their love for one another and Satoshi recites facts pertaining to condensed matter physics during battles; in America, James is gay and Ash is an idiot. Period. 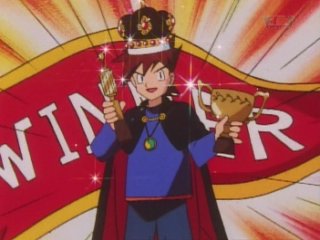 This website is dedicated to the glory of Gary Oak – the real Pokémon master from Pallet Town. Anyone interested in the origins of our site’s noble mascot/demigod should peruse this post here.

Who the hell are you anyway?

I’m an increasingly adult (in terms of age if not maturity) fan of Pokémon who was eight years old when the Pokémon phenomenon first reached American shores. You can read more about my personal Pokémon journey here. In that post I also try to explain why I go by the nom de plum “GenWunner.” But just to reiterate, although I embrace my First Generation roots, I am not here to bash the later generations of the franchise. I certainly wouldn’t spend so much of my time playing/watching the newest games and shows if I didn’t still enjoy them.

Finally, a disclaimer: all the opinions and information expressed within this site is my own, unless otherwise stated. I will give credit where it is due, because I certainly don’t know everything about the world of Pokémon (or anything else for that matter). My first stop for referencing anything Pokémon related is Bulbapedia. Most of my information about the Japanese version of the anime comes from Dogasu’s Backpack, whilst Serebii remains a prime resource for breaking Pokémon news. Anyone interested in the mechanics of the games themselves and the meta-game within the Pokémon games should visit Smogon University. As stated above, I am also heavily in debt spiritually to the deceased Pokemopolis, purveyors of Pokémon dodginess, filth, and innuendo. I also frequent Filb.de for many of my screencaps and #pocketmonsters for the episodes that never made it out of Japan.

More finally still, and I cannot stress this enough, Pokémon remains the copyrighted property of the friendly (and hopefully non-litigious) folks at Nintendo, Creatures, Game Freak, the Pokémon Company, and many other people who I’m sure have more money and lawyers than I could ever dream of. This site is fan created and operated and is not intended to violate any copyrights.

Garyland by GenWunner is licensed under a Creative Commons Attribution-ShareAlike 4.0 International License.

Garyland is a fan-created website. Pokémon (Pocket Monsters) is © 1995-2017 Nintendo / Creatures Inc. / GAME FREAK, Inc. / Pokémon. No infringement of copyrights is meant by the creation of the web site.