XY051 When Light and Dark Collide:

1802 When Light and Dark Collide

Wherein Ash’s Hawlucha joins the WWE and Jessie and James answer the call of the stage.

Last time we saw Ash and company, they began the 18th season of the Pokemon anime with a forgettable filler episode about Pancham and Chespin becoming friends – or at least not actively hating one another. The question on everyone’s mind is whether or not the second episode of the young season would be much better. Short answer: somewhat? Longer answer:

Our heroes are traveling through a darkened forest when suddenly a voice cries out, apparently in pain! Clemont uses all the deductive powers of his scientific reasoning to determine that it is a Pokemon’s voice! (Thanks, Sherlock) Running onto what looks like the seating area of an elaborate stage, Ash and friends encounter a black Hawlucha that seems to be mugging an affluent Snubbull. (Why does the bad Pokemon have to be black, Japan?) 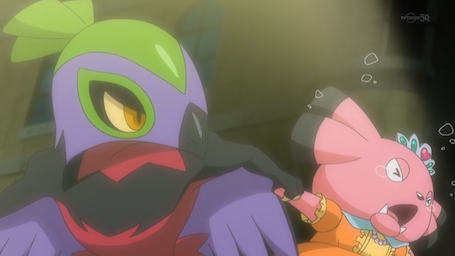 Since clearly these two Pokemon just happened to randomly be standing under a spotlight on a decorated stage in costume when this commotion started, Ash decides to go ahead and interfere by having his Pikachu deliver 100,000 volts of Thunderbolt electricity on the unsuspecting creatures before him. (Gotta Catch ‘em All! That’s how Gary would do it anyway – sneak up on your prey when they least expect it!) Strangely enough, it seems that wantonly directing high voltage energy at living creatures has consequences (not that Ash ever considers this before blasting off Team Rocket every episode…), and Hawlucha jumps backwards in surprise, as does a Gallade that popped onto the stage just after Pikachu released its attack. Snubbull and Hawlucha are fine, but the same cannot be said for the Blade Pokemon, who apparently twisted its ankle in the fall. Ash apologizes, pleading ignorance (his universal defense), but this does not mollify Snubbull, who instead of thanking her would-be savior, gives him a taste of her Thunder Fang. 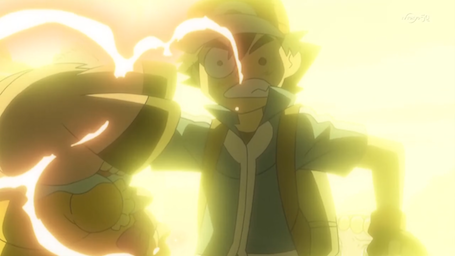 (Hey, that’s what you get when you unnecessarily stray into a boring filler episodes, dumb-Ash!)

The house lights come on, and it soon becomes abundantly clear to even the dullest crayon in the box (looking at you Ash) that our heroes have stumbled there way into some sort of theater production. The director, a literal graybeard named Carl, is about as pleased with Ash for ruining his play as Uncle Frank is about getting milk all over his slacks. 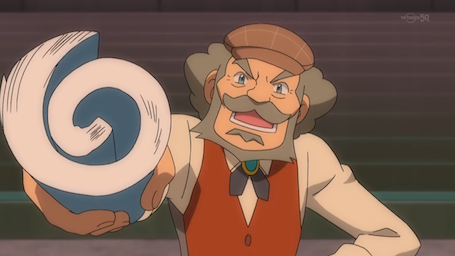 Later, inside another ubiquitous Pokemon Center, Pallet Town’s village idiot apologizes yet again to Carl for his dumb-Ashery. “I didn’t know what was happening,” he claims. (Again, this is a pretty universal excuse for Ash). Carl is pretty quick to forgive and forget, and he explains his job to the assembled Kalos twerps. He produces Super Pokemon Battle Shows! (Can you tell that Japanese people are coming up with the names for these things?) Super Pokemon Battle Shows have all the excitement of regular Pokemon battles, except they are better because everything is scripted – just like professional wrestling! 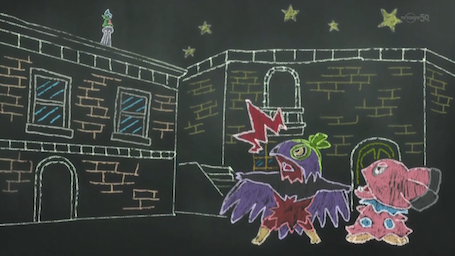 Unfortunately for Carl McMahon, despite the ringing of the patented Pokemon Center chimes, which indicate that your Pokemon are fully healed in the games, Carl’s Gallade limps out of the back room on crutches, and Nurse Joy directs that it must stay of its bad ankle for the next several days yet. Well this definitely is not what Carl wanted to hear, his star face is out of action right before Pokemon Wrestlemania – now who will battle the heel Hawlucha? It falls to little Bonnie-on-the-spot to come up with the solution of volunteering Ash’s Hawlucha as a stand-in for Gallade.

So the next day Ash and his merry band of followers arrive on set to give Hawlucha a crash course in professional wrestling. Carl explains the plot of the match. Essentially, Dark Hawlucha has stolen Light Hawlucha’s valet, and heel and face must battle it out to lay claim to Lady Snubbull. Just skimming over the racial undertones of this whole “dark = bad” thing, what’s up with Dark Hawlucha? Is he merely a shiny Pokemon, or are the writers bringing back the Trading Card Game concept of Team Rocket controlled Dark Pokemon? 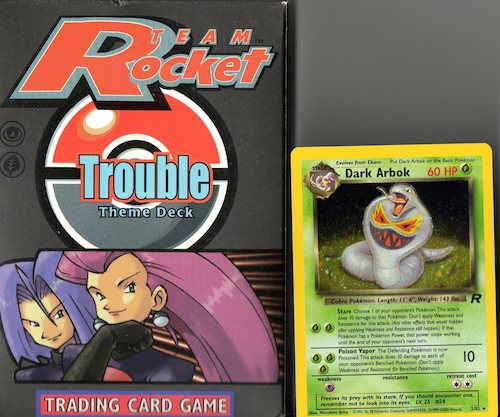 (Oh for the simpler days when Electabuzz, Scyther, and Hitmonchan where the undisputed kings of the trading card world…)

The two mexican wrestling Pokemon face off in their sparring match, but when they reach the part of the scene where Dark Hawlucha flips the face, Ash’s Hawlucha refuses to play along – to the consternation of injured Gallade. (You can almost hear him muttering “amateurs” from the bleachers as he shakes his head and face-palms) After some coaching from Ash, they run through the scene again, but again when it comes time for Dark Hawlucha to flip his rival, Ash’s Hawlucha refuses to comply and instead devastates the heel with a High Jump Kick. 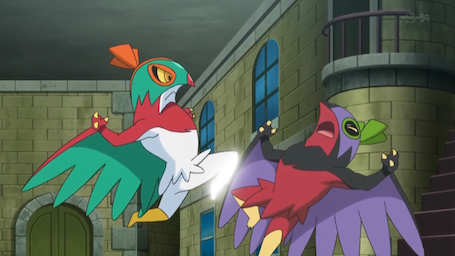 Ash’s Mexican wrestler seems to be having a real problem with the scripted nature of the wrestling profession – strange for a practitioner of the lucha libre style. In any event, Dark Hawlucha tires of the upstart punk’s constant transgressions and flies into a rage. The two Pokemon go at it beak and talon until their bout devolves into childish slapping.

Fortunately there are some true theatrical artistes amongst all of this bad acting – Team Rocket is hiding out in the bushes behind the grandstands contemplating how much Giovanni would enjoy watching Super Pokemon Battle Shows whenever he wants (because goodness knows the one thing a former gym leader like Da Boss needs more of is Pokemon fights…).

Some time later, Ash and friends try to cheer up Luchabull, who seems perplexed and saddened that its trainer is asking it to do anything less than going all out against an opponent (doesn’t Ash want it to be the best, like no one ever was?). Nearby everyone spots Dark Luchabull practicing its Flying Press by repeatedly diving off of a tree. Carl comes along and explains that before he formed the Super Pokemon Battle Show troupe, Dark Hawlucha was a Fighting type tournament champion. (Fighting tournament you say? Like the P1 Grand Prix in Kanto?) 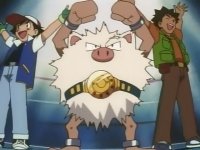 Unfortunately, injuries forced Dark Hawlucha from the tournament circuit (he was hurt by a certain P1 Champion no doubt – Ash may have forgotten you Primeape, but I never will!), and so Carl engineered a staged fighting troupe to help protect his washed-up fighter from further injury. (So Ash’s Hawlucha has been beating up on a cripple all episode? What a jerk!)

The night of the Battle Show, Ash and friends stand nervously backstage, wondering whether or not Hawlucha will be able to perform adequately. 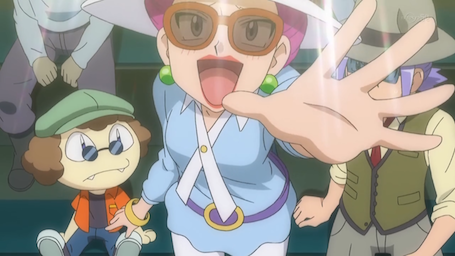 Meanwhile, among the live studio audience and the many pay-per-view Battle Show fans at home, there are three characters who are rooting for the performance not to go as planned – Jessie, James, and Meowth of Team Rocket. The terrible trio’s reigning bitch queen (since James seems to have abdicated his claim to the throne) cries out that, “the allure of the spotlight is calling my name!” This is troubling to James and Meowth, who were not planning on initiating their plan so soon. But James has never been one to shy away from playing dress-up, so Johto’s BlueShipping pair follow their thespian queen as she rushes towards the stage.

The spotlights click on, and the familiar Team Rocket theme begins to swirl on the organ. 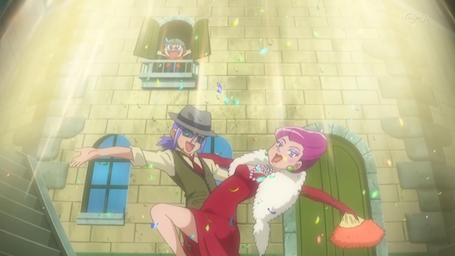 Magnificently dressed in a red dress with pearls, furs, and a fan, Jessie descends the stairs into the arms of her leading man. 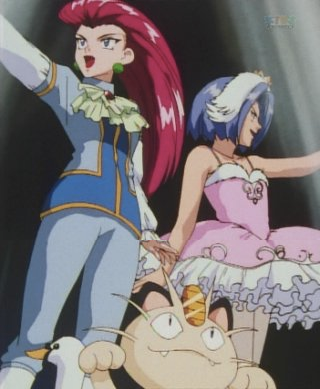 (Unfortunately James is not dressed in the same attire as he was in his theatrical debut, but he manages to look gay enough, nonetheless…)

Much like Tobias Fünke, Jessie and James desperately want to be – actors!

Team Rocket strip down to their uniforms to the surprise of everyone, including the easily-duped Ash Ketchum. Our dim-witted hero explains to Carl how the show’s voluptuous villains are bad people who (attempt to) steal Pokemon. (Although Jessie remarks that today she is here to steal the show…) James’ Inkay manages to knock out Pikachu with just one Psybeam, so with Team Twerp’s main Rocket-killer temporarily out of action, Hawlucha and Dark Hawlucha are forced to put aside their differences and work together to send Team Rocket blasting off again. 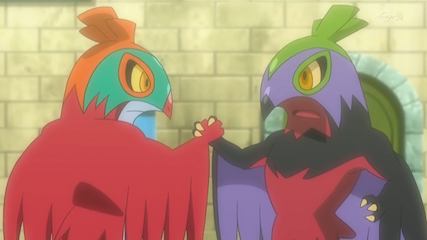 (Hands up everybody who saw that coming…)

So with the villainous opening act out of the way, the Pokemon Battle Show title card matchup can commence. Unfortunately, Hawlucha comes down with a major case of stage fright, but it is able to recover and soon he and his Dark counterpart both decide to cast the script aside and match their power Hawlucha to Hawlucha to determine who is the true master of the lucha libre style. The crowd shifts back and forth supporting both combatants, but in the end the heel Dark Hawlucha is defeated, and a relieved Ash can rest secure in the battle power of his newest Pokemon. 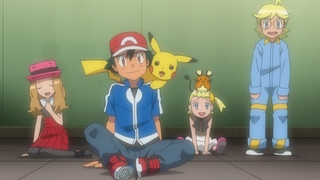 So with that, another episode of Pokemon is over. Our heroes make the usual hollow promises to Carl and Dark Hawlucha about meeting again, and they depart for destinations unknown.

Final thoughts: A little better than the last episode, but I’m still waiting for the 18th season to really find its groove. After the overall success of Season 17, it’s been disappointing to start the new one with a couple of misfires. Bring on the non-fillers, Pokemon writers!