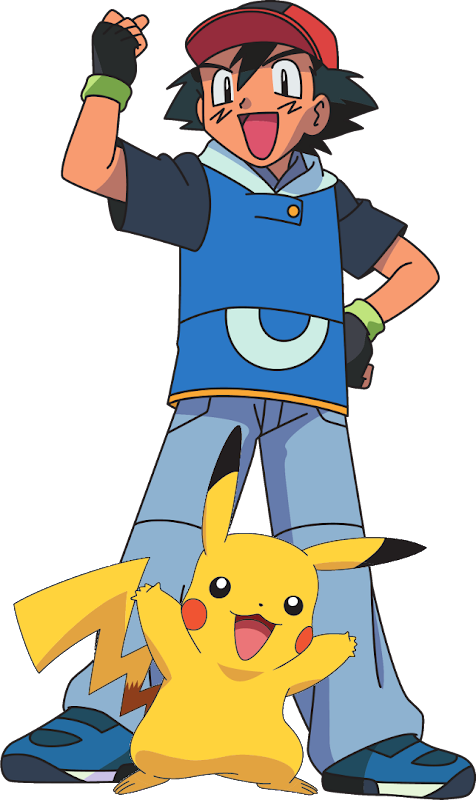 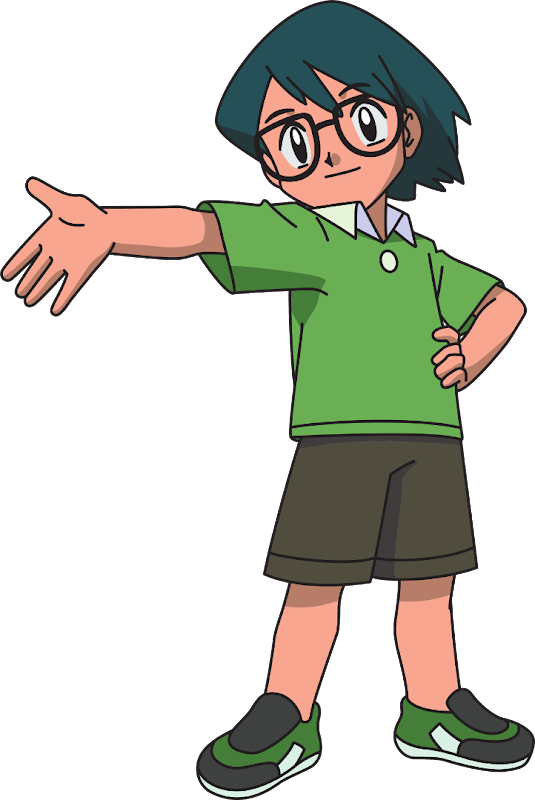 Wherein Ash and the gang join the Scooby Doo Detective Agency, Team Rocket gets high, and Wobbuffet falls in love. 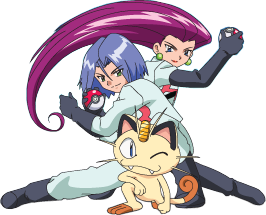 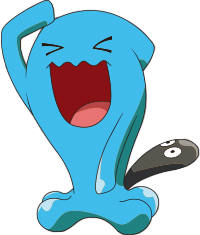 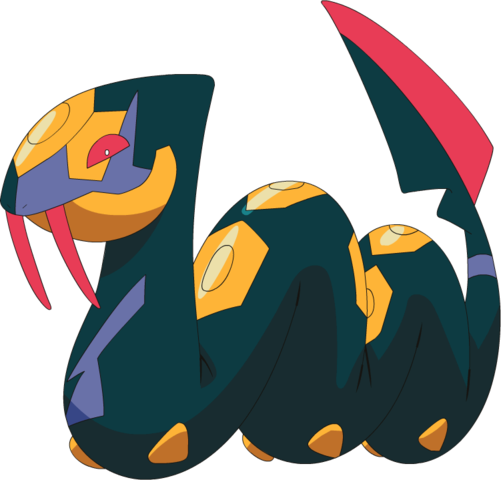 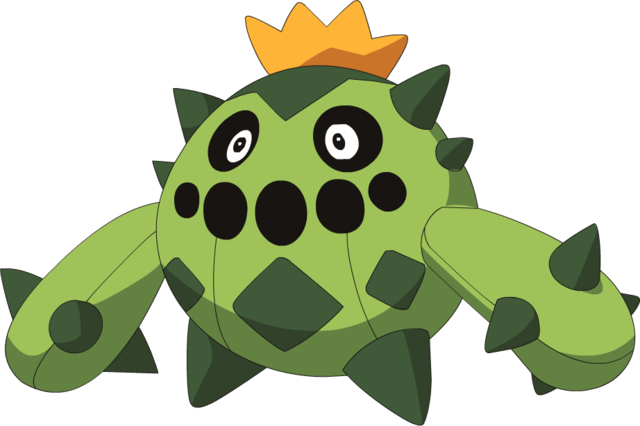 For eight years 4Kids Entertainment produced the English dub of the Pokemon anime and did a pretty damn good job, all things considered. The company caught a lot of flack for its meddling with the original script and music, its need to paint over all Japanese writing, and its apparent lack of knowledge (or concern) about the Pokemon franchise in general. Nevertheless, 4Kids’ Pokemon dub was quite good, as far as anime dubs go, especially for its time. 4Kids actually preserved most of the zaniness and risque moments of the first few seasons, and it would be unreasonable to expect an American network anime dub to preserve as much of the Japanese-ness as the purists out there would have liked anyhow. 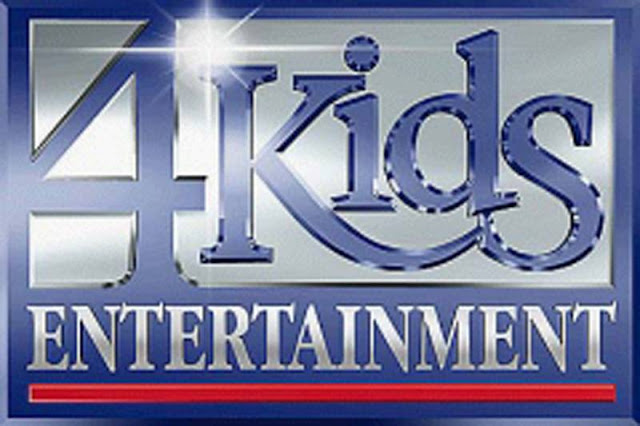 Still, when 4Kids’ contract expired in 2006, the Pokemon Company decided the time had come to take control of the anime itself. However, in a controversial cost-cutting move it also decided to replace the well-known veteran voice actors with cheaper alternatives – except for Gary of course, because you can’t top perfection. As a paid-up card-carrying genwunner, I personally prefer the original voices for almost all the characters, but all these years later I don’t think it matters anymore. It’s not like they went back and redubbed the first few seasons or anything like that. 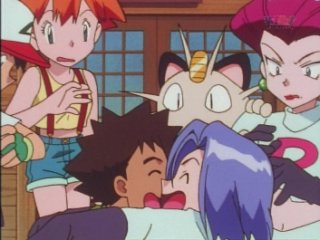 This episode marks the regular series debut of the new voices. The biggest losses, IMHO, are Eric Stuart (Brock, James) and Maddie Blaustein (Meowth). New Brock is not that bad, and neither is James for that matter – but he could never top the brilliance of Stuart’s campy delivery. New Meowth (same actor as new James, new Oak, and Gary) is just terrible. To this day Meowth’s voice still irks me. Ash’s new voice, while not quite as good as before, definitely highlights his stupid side. As an added bonus, the original narrator also makes a return at this time.

Anyway, today (or tonight, rather) our heroes have stumbled into an Old West ghost town – just the kind you would expect to stumble across as you travel around the Japanese countryside. And what would a stock Old West town set be without a stock Old West mineshaft? 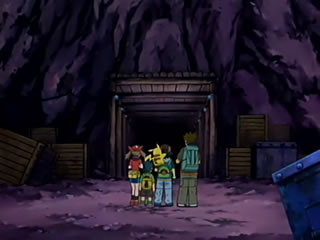 And in a scene right out of an episode of Scooby Doo, a spooky ghost appears (looking like a giant Haunter), which causes the gang to flee out of the mine in fright and right back into the Old West town (Ash having apparently forgotten he once befriended a group of fun-loving ghosts, who saved him and his friends from a psychopath gym leader).

Meanwhile, Team Rocket is on the scene as well, but something is…off. 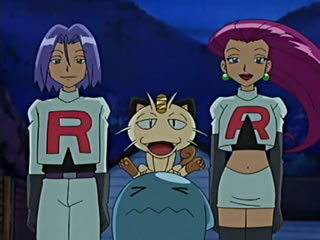 Perhaps it is from the stress of repeatedly disappointing their boss – a super-powerful crime lord bent on world domination, or maybe it is from the depression that comes from dedicating your life to stalking the world’s stupidest Pokemon trainer, but whatever the reason, it seems that Team Rocket had decided to resort to natural means to take the edge off.

They look and sound high as a kite (or a Rocket, perhaps?), except for Wobbuffet, who looks as patient as always (maybe he is the designated balloon pilot?). At any rate, Team Rocket decides to investigate the mine that the twerps just fled in fear. Inside, they see the same Haunter apparition…and promptly pass out. Eventually they come to, complaining of hunger, and then break into a spontaneous dance routine? Sounds reasonable. 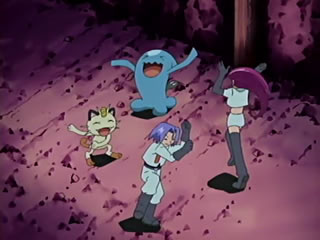 But hold on a second, mysterious ghosts, drugs, munchies, dance scenes? This really is an episode of Scooby Doo! All the parts can be easily cast as well: Brock and May are Freddie and Daphnie (Let’s split up – I’ll go with Daphnie and we’ll search the bedroom area, you guys check the rest of the castle), Max is Velma, and Ash and Pikachu are Shaggy and Scooby (although it seems that in this episode Team Rocket have been dipping into their stash of “Scooby Snacks”).

Suddenly, Team Rocket’s trip abruptly shifts from delightful to terrifying with the return of the giant Haunter apparition. 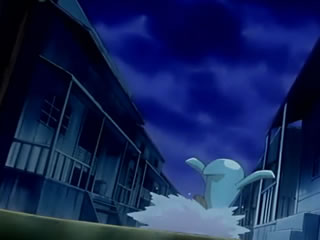 Wobbuffet demonstrates the clear-headed thinking of someone above the influence of hallucinogenic drugs…and rapidly books it out of the mine, leaving his crazed comrades behind.

Exhibiting the opposite reaction to the fight-or-flight response from the normally patient Wobbuffet, Team Rocket decide to stand their ground. But Seviper and Cacnea prove ineffective against the frightening foe, and Jessie decides to send in Meowth instead (never a sign that the fight is going well), reasoning that he has nine lives after all. Jessie’s aim proves a little wide of true, and Meowth crashes into a transformer, and does what he and his pals do best – receiving a seemingly-fatal dose of electricity. 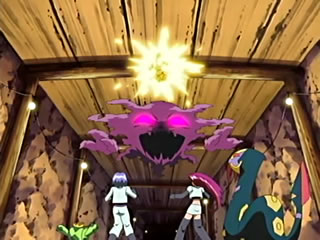 As a result, the three Rocketeers come to a startling conclusion – the ghost wasn’t real at all! But it wasn’t old Mr. Jenkins from the beginning of the episode who was behind the haunting (to scare away other prospectors and reap the treasures of the mine for himself, undoubtedly), no, it was actually a group of timid-looking ghost pokemon. Jinkies! It seems this mystery is not over yet.

Back in town, Ash and company have exercised squatters’ rights and camped out inside an abandoned saloon-looking building. 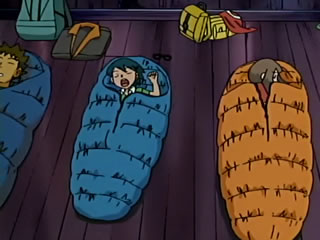 Max looks like he is trying to subconsciously transition from a yawn-stretch into a sister-grope (PetalburgShipping!), except that May’s sleeping bag is too far away. Meanwhile, there is something other than the thought of forbidden sibling-loving that is keeping May awake – she is still seriously freaked-out by this whole ghost town situation, and now she can hear strange music too! So in a move that would surely anger both would-be suitors Brock and Max (while simultaneously sending AdvanceShippers into fits of rapture), May chooses the indifferent/oblivious Ash as her masculine protector. 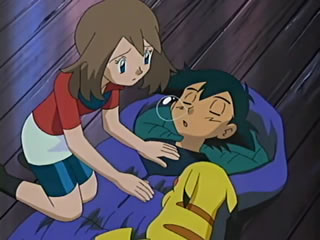 Yet true to form, Ash is too busy sleeping (and blowing snot-bubbles (he even sleeps stupid!)) to worry about a frightened/vulnerable female kneeling over him in bed. Instead, Ash mutters something about the only thing in the world he loves besides pokemon (and it ain’t Misty) – food.

May finally manages to get the boys awake by using her secret feminine technique (high-pitched screaming, you perverts), and the gang delves deeper into the building to find the source of the mysterious music. They come to a door…and Zoinks! For the second time this episode we stumble across a pokemon dance party. 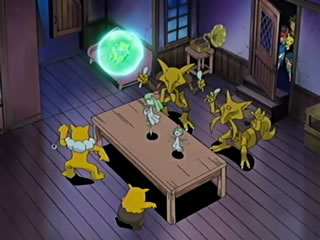 Unfortunately, our heroes’ arrival only serves to frighten the prancing psychic pokemon. Well, all except for an Abra who seems to share Ash’s love of deep sleep (down to the snot-bubble). Using some kind of Harry Potter pensieve technology, the group becomes privy to Abra’s thoughts and learns all about the sad history of the psychic pokemon. They were once enslaved by turn-of-the-century-looking miners back in sepia-toned times so as to perform all of the actual manual labor of the mining operation (and thus making the miners themselves unnecessary). 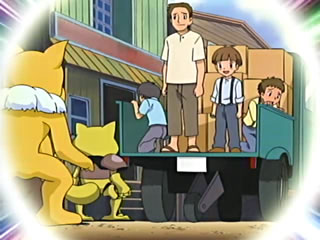 But once the mine ran dry, the humans packed-up and like good capitalists they left their pokemon work force behind – with nothing to do except rock and roll all night and party every day. Unfortunately there was no way for the pokemon to shrink in size (like inside some kind of ball shaped device) and easily fit on the truck with the humans and their other possessions, and so they were forced to stay in the town. Having learned the sorry truth about the psychic pokemon, Ash and company settle on a brilliant strategy – they will throw the third dance party of the episode in order to win the trust of Abra’s friends.

So while our heroes start to get down with the psychic residents of the ghost town, Team Rocket (minus Wobbuffet) is back in the mineshaft listening to the ghost pokemon tell their story thanks to the translation skills of the talented and under-valued Meowth. It seems that the ghost pokemon are the cranky old people of the neighborhood who just want some peace and quiet, dammit! When the psychic types insisted on making their infernal racket inside the mine, the ghosts metaphorically told them to get off my lawn you damn kids in the form of their giant Haunter apparition. 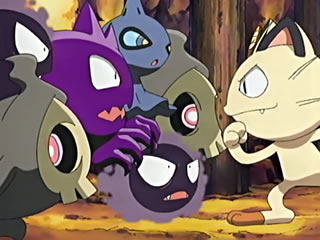 However, the ghosts haven’t ran the ne’er-do-wells out of the neighborhood just yet – and this is where Team Rocket comes in. They figure the ghosts and their psychic enemies might come in handy for future criminal enterprises, and decide to temporarily align themselves with the cause of the cranky old ghosts. 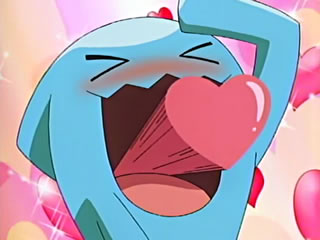 Yes it seems that Wobbuffet has been indecisively running laps around town since the beginning of the episode, too afraid of the ghosts to stay in the mineshaft with Team Rocket, but far too loyal to abandon his friends entirely. When what to his wondering closed eyes should appear, but a smoking-hot Kirlia getting her funk on at the psychic pokemon midnight dance party. 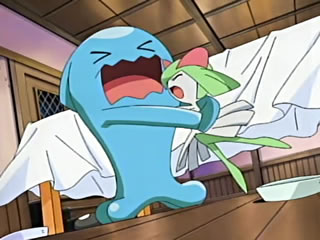 Wobbuffet bursts into the room, violently blushing and clutching a flower behind his wobbly back, which he gives to the Kirlia, before claiming her as his own. Apparently no is not a word that Wobbuffet is familiar with.

But like Romeo and Juliet before them, it seems that the love between these two pokemon was not written in the stars. An explosion brings a premature end to the psychic pokemon dance party. The giant Haunter apparition has reappeared and proceeds to eat up Pikachu and all the psychic pokemon – including Kirlia! Well Wobbuffet is having none of that, and he jumps into the Haunter’s mouth too. 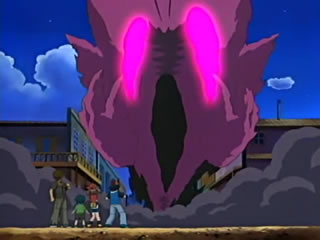 This action appears to give the Haunter indigestion and results in some cross words from Team Rocket offscreen. Wobbuffet’s bad taste breaks the ghosts’ concentration and makes the Haunter apparition disappear, revealing Team Rocket’s big-lipped ghost mecha underneath.

The Twerps are unmoved by Team Rocket’s rendition of the plight of the grumpy old ghost pokemon (and TR’s desire to relocate the psychics and Pikachu to the greener pasture’s of Giovanni’s office). Wobbuffet also fails to live up to the mantra of “criminal bros before pokemon hoes,” and breaks all the rules of the Pokemon universe (and his binary coding) by using an offensive attack to shatter the bars of Team Rocket’s cage, thus freeing his lovely lady (and the other pokemon too). 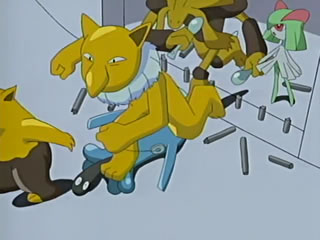 Proving no good deed goes unpunished, Wobbuffet is promptly trampled under foot by the escaping psychics (and Pikachu too, the dick).

Unwilling to accept Wobbuffet’s “high treason,” Team Rocket orders the ghost pokemon to attack the fleeing psychics, but Kirlia chooses this moment to reveal her true colors. Proving blood is thicker than Wobbuffet, she uses Reflect to divert the ghostly attack back at Team Rocket and her blue suitor, causing them to blast off once again (and giving James an opportunity to ruminate out loud on the state of his relationship with Jessie’s Wobbuffet).

Having forcibly disrupted Team Rocket’s attempt to solve the psychic/ghost feud, the meddling kids (and their Pikachu too) have to come up with another solution on the fly. Somebody (probably not Ash) realizes that if Abra extends its Safeguard to envelop all of the psychic pokemon then they can boogie woogie to their hearts content (and repress the memories of their willful abandonment). Theoretically the ghost pokemon can now travel around the town in peace and quiet…except Ash and friends are standing outside the Safeguard and they (and we) can hear the music? Ah whatever, at least they can all sleep easy knowing Team Rocket probably suffered life-ending injuries as a result of the earlier explosion. Plus poor Wobbuffet had its heart stomped on and crushed like Brock usually does. Another happy ending!